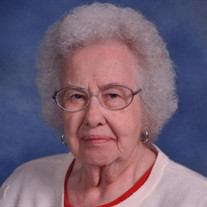 Marjory Irene Horton, age 95, of Sioux City, died on Monday, August 12, 2019 at a local care facility. Funeral services will be held at 10:30 a.m., Friday, August 16, 2019, at Christy-Smith Funeral Homes, Morningside Chapel, with burial following at Banner Township Cemetery in Lawton. Visitation will be on Thursday, August 15, 2019, from 5:00 p.m. to 8:00 p.m. at the funeral home. Marjory was born in Sac City, Iowa on January 12, 1924. She attended Sac City Community Schools. Marjory was united in marriage with Clifford Horton on June 20, 1942. The couple moved to Sioux City following their marriage. Marjory worked as a librarian with the Sioux City Community School District at McKinley School. She stayed there for 27 years, retiring in 2003. Marjory greatly enjoyed her interaction with the teachers and students. She was a great cook and a wonderful baker who shared her love of baking with her family. Marjory was a member of the Daughters of the American Revolution. She was an avid reader and loved working on crossword puzzles. Marjory is survived by her son, John and his fiancée, Kelli Blair of Sioux City; her grandchildren, Luke and Alison Horton; two great-grandchildren, Gavin and Brooklyn; a sister, Carol Zigalla; and many nieces and nephews. She was preceded in death by her mother, Helca; her husband, Clifford in 1976; a sister, Arlene; and brothers, Bill, and Melvin.

The family of Marjory I. Horton created this Life Tributes page to make it easy to share your memories.

Send flowers to the Horton family.