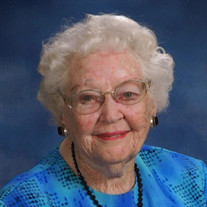 Marjorie Alice (Alberts) Clausen passed away on April 16, 2020, at her home in Sioux City at age 96. Marjorie was born in Sioux City on February 16, 1924, the daughter of Robert W. Alberts and Bessie (Cushing) Alberts. She attended Whittier Grade School, East Junior, and graduated from East High School. On October 20, 1941, Marjorie married Royle C. Clausen, her high school sweetheart. Marjorie was trained and worked for Western Union during WWII and served in both Los Angeles, CA and Cape Cod, Mass. After the war, the young couple built their own home on Stone Avenue in Sioux City. Four children were born from their union, and Marge was a loving wife, mother and grandmother. Her days were filled with baking, sewing, reading, gardening, canning and freezing her garden produce. She took delight in her beautiful flower garden. Marge was a lifelong member of St. James United Methodist Church and served there in many capacities. She belonged to the Miriam Circle and United Methodist Women. The couple belonged to the Skirts and Flirts Square Dance Club and Funtastics Round Dance Club. They were winter Texans for 23 years and traveled extensively in Canada and Mexico as well as the U.S. They enjoyed a monthlong retirement trip in Europe. The couple were married for 69 years. Marge was a member of the Morningside Garden Club and the Red Hat Ladies. For the last fourteen years of her life, she lived in a cottage at Sunrise Retirement Community. She continued her flower gardening skills there, and the other residents admired her beautiful garden and she became known as “The Flower Lady”. Marjorie is survived by three daughters, Linda (Steve) Camarigg and Kathy (Larry) Bates of Sioux City, Carol (Bill) Spencer of Thornton, CO, and daughter-in-law, Aggie Clausen of Sioux City, eleven grandchildren and twenty-one great grandchildren. She was preceded in death by her husband and her son, Gary Clausen. Memorials may be addressed to St. James United Methodist Church in Sioux City. Because of the coronavirus pandemic, private graveside services will be held at Memorial Park Cemetery. A Celebration of Her Life will be held at a later date.

Marjorie Alice (Alberts) Clausen passed away on April 16, 2020, at her home in Sioux City at age 96. Marjorie was born in Sioux City on February 16, 1924, the daughter of Robert W. Alberts and Bessie (Cushing) Alberts. She attended... View Obituary & Service Information

The family of Marjorie Clausen created this Life Tributes page to make it easy to share your memories.

Send flowers to the Clausen family.