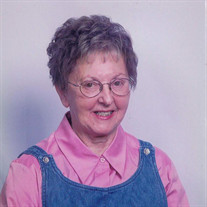 Marilyn J. Reed, 88, died Saturday, October 9, 2021, at Whispering Creek Senior Living in Sioux City, IA. A memorial service will be 10:00 am Wednesday, October 20, 2021, at Christy-Smith Funeral Home, Larkin Chapel, 2320 Outer Drive North, with visitation one hour prior. Burial will be in Memorial Park Cemetery. Online condolences may be expressed to the family at www.christysmith.com. Marilyn Joyce Brown, the daughter of George and Evelyn (Coleman) Brown was born February 4, 1933, in Correctionville, IA. She graduated from Correctionville High School before enlisting in the U.S. Navy. On August 25, 1963, Marilyn was united in marriage with Charles Reed in Sioux City. She was primarily a homemaker but did hold various positions outside the home over the years including at AT&T and McDonald’s. Charles died November 8, 2001. Marilyn enjoying exercising and playing racquetball. Marilyn is survived by her sons, John of Sioux City, Eric of Yankton, SD; grandchildren, Jacob and Charlize Reed; a great-granddaughter, Allison Reed; step-grandson, Travis Moerman; siblings, Larry (Vesta) Brown of Sioux City, Connie (Dave) Harris of Spokane, WA; and many other relatives and friends. She was preceded in death by her parents, husband, and five siblings. Donations may be made to the Alzheimer's Association or Cancer Research.

The family of Marilyn Joyce Reed created this Life Tributes page to make it easy to share your memories.

Send flowers to the Reed family.