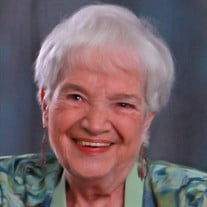 Marilyn Jean Hackett, 93, passed away at her residence Friday, August 21, 2020 following a brief illness. A Funeral will be held at 10:00 a.m., Thursday, August 27, 2020 at St. Joseph Catholic Church of Sioux City. Burial will be in Calvary Cemetery. Visitation at Christy-Smith Funeral Homes, Larkin Chapel, 2320 Outer Drive North, Sioux City, will be at 6:00-8:00 p.m., Wednesday, August 26, 2020 with a parish vigil service held at 7:00 p.m. Marilyn Hackett was born November 21, 1926 in Sioux City. Her parents were Lysle F. Curtis and Marguerite (Carney) Curtis. She graduated from East High School in 1945. She then attended Briar Cliff College, graduating in 1949 with a Bachelor of Arts in English and Education. She began her teaching career in Red Oak, Iowa, later relocating to Sioux City where she taught for many years at St. Joseph Grade School and Emerson Public School. The majority of Marilyn’s career was as a kindergarten teacher and throughout her entire life, she would meet former students on the street who shared fond memories of her as their favorite teacher. On August 11, 1951, she was united in marriage to Robert Hackett at Immaculate Conception Church in Sioux City. To this union, three sons, Curtis Daniel, William, and Timothy were born. She retired from teaching in 1988. Marilyn was a loving wife and mother. She cherished the time spent with her children and grandchildren, who were the joy of her life. She was an avid mystery reader who read a book a day for many years. She was an animal lover and enjoyed the company of her pets throughout her entire life. Left to cherish her memory are two sons, William (Jo) of Sioux City and Tim (Barbara) of St. Louis, MO; daughter-in-law Cathy Larschan of Tulsa, OK; seven grandchildren and four great grandchildren; and family friend Julie Walsh. She was preceded in death by her parents; her husband, Robert; one son, Curtis Daniel; and her brother, William Curtis. Memorials can be directed to Hospice of Siouxland, 309 Cook Street, Sioux City, IA 51103.

The family of Marilyn Jean Hackett created this Life Tributes page to make it easy to share your memories.

Marilyn Jean Hackett, 93, passed away at her residence Friday,...

Send flowers to the Hackett family.