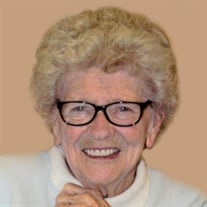 Marilyn Blatchford, 90, of Sioux City, passed away February 11, 2021 at Embassy Rehab and Care Center with loved ones’ present. A Visitation will be 5:00 – 8:00 pm Wednesday, February 17, 2021 with a Public Prayer Service at 7:00 pm at the Christy-Smith Funeral Homes, Morningside Chapel, 1801 Morningside Ave, in Sioux City, IA. A Private Family Service will be held at Faith United Presbyterian Church in Sioux City with Pastor Dave Koehler officiating. Burial will be at Memorial Park Cemetery in Sioux City, IA. Services will be live streamed at 10:00 a.m. Thursday, February 18, 2021 on the Faith United Presbyterian Church’s Facebook page https://www.facebook.com/FaithUPC The family is inviting family and friends to a luncheon and fellowship 12:00 pm, Thursday, February 18, 2021 at Elks Club, 1001 Tri View, Sioux City, IA. On-line condolences may be left for the family at www.christysmith.com Marilyn was born on July 8, 1930 in Sioux City, IA, the daughter of Alfred and Luella Larson. She was raised and went to school in Bronson, IA where she graduated from high school there in 1949. She played basketball and was a cheerleader. Marilyn married Donald “Keith” Blatchford on June 15, 1949 in Bronson. Together they raised six children in Sioux City. Her husband Keith passed away April 29, 1984. Throughout her life Marilyn was a Boy Scout leader, Girl Scout leader, Sunday school teacher, ceramic class instructor. She worked at Kresge’s, the Biltmore, Wilson Trailer, and had a store in the Kay Dee building and a craft store in Le Mars. Marilyn worked for Christmas Around the World where she won many awards and trips, one of which was Jerusalem where she was baptized in the Jordan River. She was known as Lady K in her CB days. Marilyn loved to fish, quilt, camp and following her grandchildren’s sporting events. She was their biggest fan. She was an active member of her church since 1958 where she was awarded Presbyterian Woman of the Year. Those left to cherish her memory are her six children, Ron (Jesse) Blatchford of Sioux City, IA, Roger (Sheryl) Blatchford of Sioux City, IA, Dave (Anne) Blatchford of Sioux City, IA, Bill (Sue) Blatchford of Sioux City, IA, Judy (Mike) Madsen of Sioux City, IA, Bonnie (Danny) Brosamle of Moville, IA; 16 grandchildren; 33 great-grandchildren; 7 great-great-grandchildren; and sister, Mabel (Milo) Swanger of Ozark, MO. Marilyn was preceded in death by her parents; husband; her sister, Dorothy Corbin; brother, Dean Larson; and 4 great-grandchildren. Pallbearers and honorary pall bearers will be Marilyn’s grandchildren. A special thank you to the Embassy staff for being “Grandma” Marilyn’s family and taking such great care of her this past year and to Care Initiatives Hospice.

The family of Marilyn Joyce Blatchford created this Life Tributes page to make it easy to share your memories.

Send flowers to the Blatchford family.