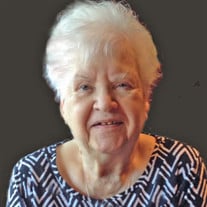 Marcella "Marcie" J. Moore, 93, of Sioux City, died on Saturday, Oct. 26, 2019, at Sunrise Retirement Community in Sioux City. Service will be 10:30 a.m. Tuesday, Nov. 5, at Immaculate Conception Church, Mater Dei Parish, 1212 Morningside Avenue in Sioux City, with the Rev. Andrew Galles officiating. Interment will be in St. Martin's Cemetery at Odebolt, Iowa. Visitation will be one hour prior to the service at the church. Online condolences may be made to the family at www.christysmith.com. Marcie was born March 1, 1926, in rural Sac County, Iowa, to William and Dora (Klindt) Miller. She married Robert E. Moore on Oct 22, 1949, in Odebolt. The couple lived in Odebolt until 1962, when they moved to Sioux City. Marcie worked at Roe Dairy in Sioux City from 1962 to 1964. She then was employed at Truck Haven as the restaurant manager, retiring in 2004. She was a member of Church of the Nativity, Mater Dei Parish. She also belonged to the Red Hat Society and the mall walkers. She enjoyed spending time with her family and attending her grandchildren and great- grandchildren's events. Surviving are son, Gary Moore of Sioux City; two daughters, Margaret J. and David Mitchell of Omaha, and Kristi and Eugene Dather of Sergeant Bluff; son-in-law, Mike Anderson; sister, Lorraine Levan of Sandy, Ore.; 10 grandchildren; 17 great-grandchildren; and four great-great-grandchildren. She was preceded in death by her parents; her husband, Robert; a daughter, Patricia Anderson; great-granddaughter, Mia Ray; two brothers; and four sisters. Family would like to thank Sunrise Retirement Community, especially Sunlight and Bayberry staff, for their care of Marcie.

The family of Marcella J. "Marcie" Moore created this Life Tributes page to make it easy to share your memories.

Send flowers to the Moore family.