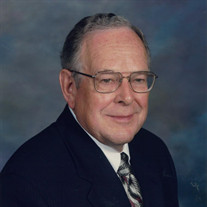 Maclyn Benjamin Clancy, 94, Sioux City, died October 3, 2021, at a local nursing home. Funeral services will be at 11:00 am on Thursday, October 7th at the Christy-Smith Funeral Homes Larkin Chapel (located at 2320 Outer Drive North in Sioux City) with Father Jerome Cosgrove officiating. Burial will be at Calvary Cemetery on Friday, October 8th. Visitation will be one hour prior to the service on Thursday, October 7th at Christy-Smith Funeral Homes Larkin Chapel (located at 2320 Outer Drive North in Sioux City). Condolences can be left for the family at www.christysmith.com. Maclyn was born September 14, 1927, to Andrew M. And Lillian (Kanninan) Clancy at Hardy, IA. He grew up on the family farm attending Hardy Public Schools thru the tenth grade, graduated in 1945 from Renwick High School, Renwick, IA. Maclyn entered the US Army Air Corp in 1946 and was honorably discharged in 1947. After his time in the service, he returned home to work on the family farm. He married Madonna Margaret Fleskes on November 29, 1952, at Fort Dodge, IA. He later attended the University of Iowa and earned a degree in Civil Engineering in 1955. While at the University of Iowa he was a member of the Tau Beta Phi Engineering fraternity. After college the couple moved to Sioux City where he started his 35-year career with Klinger-Younglove Construction, as a design engineer, retiring in 1992. In 2006, he helped start Mac’s Auto Repair with his son John in Sioux City. Maclyn enjoyed traveling, Iowa wrestling, walking, doing crossword puzzles, playing chess, and spending time with his family. He was a member of St. Michael Church of the Holy Cross Parish in Sioux City, and the Knights of Columbus. Maclyn also volunteered with Hospice of Siouxland. Those left to cherish his memory are his wife Madonna Clancy of Sioux City, 3 sons’: Gregory (Inge) Clancy of Iowa City, Paul (Aimee) Clancy of Sioux City, and John (Valerie) Clancy of Sioux City. 2 daughters; Patti (Rick) Jacobson of Dakota City, NE and Kate Clancy and her significant other Jeff of Chaska, MN. 11 grandchildren, 4 great grandchildren and numerous nieces and nephews. He was preceded win each by his parents, son Brian Clancy, 2 grandchildren; Jennifer and Anthony and 2 brothers; Andrew and Gerald Clancy, In lieu of flowers the family requests Memorials to Hospice of Siouxland.

The family of Maclyn Benjamin Clancy created this Life Tributes page to make it easy to share your memories.

Send flowers to the Clancy family.