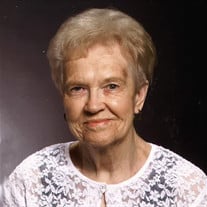 M. Lavonne Millarke, 93, of Sioux City, passed away peacefully on Saturday, Oct. 20, 2018, surrounded by her family. Services will be 10:30 a.m. Thursday at Mater Dei Parish, Immaculate Conception Center, with the Rev. Daniel Rupp officiating. Burial will follow at Memorial Park Cemetery in Sioux City. Visitation will begin at 9:30 a.m. Thursday at the church. Condolences can be left online for the family at www.christysmith.com. Margaret Lavonne Millarke, the daughter of Margaret (Mortensen) Cox and DeWitt (Mick) Cox, was born on Nov. 19, 1924, in Oto, Iowa. She was raised and educated in Oto, graduating from Oto High School with the class of 1942. After high school, she attended Wayne State College, in Wayne, Neb., and Edwards Business Institute in Sioux City. On Aug. 31, 1946, she was united in marriage to Robert Millarke, at the Cathedral of the Epiphany in Sioux City. They were the parents of a son, Tim, who passed away Oct 9, 2000. She was a secretary for the Burroughs Corporation, Amour and Company, and retired from Kay Dee – Nurtra-Flo Company. She had been an active member of Immaculate Conception Catholic Church; the Altar Society and the Bereavement Committee; Catholic Daughters; George Nelson Post American Legion Auxiliary; several bridge clubs; and a former volunteer at the Bargain Center and Countryside Senior Living. Survivors include her husband of 72 years, Robert; a granddaughter, Rebecca (Alex) Vetos of Kemmerer, Wyo.; two great-granddaughters, Lilly and Holly Vetos of Kemmerer; three sisters, Norma Coon and Marcia (Dick) Pruehs of Sioux City and Judy (Dean) Specht of Yankton, S.D.; and many nieces and nephews. She was preceded in death by her parents; her son, Tim; a sister, Virginia Steinhoff; and a brother in-law, Cecil Coon. In lieu of flowers, the family request memorials in Lavonne’s name to Mater Dei Parish, Immaculate Conception Center or Hospice of Siouxland.

The family of M. Lavonne Millarke created this Life Tributes page to make it easy to share your memories.

Send flowers to the Millarke family.