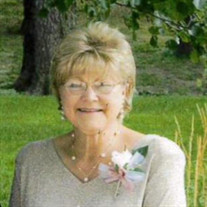 Lynn Faye Wolf, age 74, of Sioux City, was received into the loving arms of Jesus on Friday, March 4, 2022, at Countryside Health Care Center surrounded by her children. A memorial service for both Glen “Fred” and Lynn Wolf will be 10:30 a.m. Saturday, March 26, 2022, at Christy-Smith Funeral Homes, Morningside Chapel. Lynn Faye Monson was born on March 27, 1947, in Orange City, IA, the daughter of Clifford Roland Monson and Helen LaVonne (Van De Burg) Monson. Lynn was raised in Hospers, IA until the age of 12. The family then moved to Storm Lake, IA. She graduated from Storm Lake High School in 1965. Lynn married the love of her life, Glen “Fred” Wolf in August of 1966. The couple had three children, Sarah, John, and Paul. Lynn worked at the Mary Greeley Medical Center in Ames, IA in surgery while helping to put her new husband through college. Then she became a great stay at home mom, taking care of her children. Lynn also did daycare for countless children for many years. In the late 80’s she worked for Morningside College. In the 90’s the couple relocated to Ankeny, IA where she worked as a teachers aid for many years until retirement in 2010. She spent her entire life caring for others. Lynn loved spending time with her family, grandchildren, and great grandchildren. She enjoyed adding to her extensive shoe collection. She loved singing in the church choir. She enjoyed having coffee with her friends. She is survived by her three children, Sarah (Wolf) and Jack Taylor of Sioux City, John Wolf of Sioux City, Paul Wolf and Abby Weibel of Sioux City; brothers, Roland and Roberta Monson of Wichita, KS, Darwin Monson of Storm Lake, IA; sister, Carmen (Monson) and Howard Diischer of Storm Lake, IA; grandchildren, Jacob Taylor, Marinda Golden, Skylar Taylor, Chelsea Wolf, Whitney Wolf, Alexis Wolf, Parker Wolf; great grandchildren, Madisun Taylor, Alehia Garner, Blake Wolf-Garner, Liam Nelson, Jayce Taylor. She was greeted in heaven by the love of her life, Fred, along with her parents Helen and Ole Monson.

Lynn Faye Wolf, age 74, of Sioux City, was received into the loving arms of Jesus on Friday, March 4, 2022, at Countryside Health Care Center surrounded by her children. A memorial service for both Glen &#8220;Fred&#8221; and Lynn... View Obituary & Service Information

The family of Lynn Faye Wolf created this Life Tributes page to make it easy to share your memories.

Send flowers to the Wolf family.