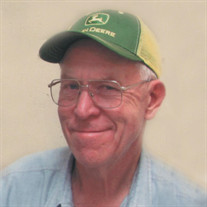 Lyle D. Moffatt, 76, of Sioux City, died Monday, January 6, 2020 at an Omaha, NE area hospital. A visitation will be 2:00 pm to 5:00 pm Sunday January 12, 2020, at Christy-Smith Funeral Homes, Larkin Chapel, 2320 Outer Drive North, with a prayer service at 4:00 pm. A funeral service will be 10:30 am Monday January 13, 2020, at Central Baptist Church with burial in Westfield Cemetery. Lyle Dean Moffatt, the son of Allen and Viola (Peck) Moffatt was born March 11, 1943, in Lynch, NE. He graduated from high school in Westfield, IA in 1961. Lyle farmed with his father and then on his own over the next 15 years. He sold his farm in 1976. On April 21, 1978, Lyle was united in marriage with Geraldine “Gerrie” Cole in Vermillion, SD. He worked for Fuller Brush as a salesman, drove for Robert’s Dairy, and drove for Dan Dugan Transportation. Lyle then went to work for Consumers Supply, where he remained until his retirement on May 1, 2010. Lyle was a member of Central Baptist Church. He also belonged to the 2 Cylinder Club in Spencer, IA, The Tractor Club at the Plymouth County Fair, and the N.R.A. Lyle enjoyed collecting tractors, both toy and full-sized. He even helped restore two tractors that had been in the family for many years. Lyle enjoyed woodworking and attending Threshing Bees. He was an avid reader, and researched many topics like Clydesdales, Steam Engines, and rural life. Lyle was also very faithful about reading his Bible. Lyle is survived by his wife, Gerrie of Sioux City; his children, Karl (Estella) Dicks of Honolulu, HI, Paul (Teresa) Dicks of Mapleton, IA, Kristy (Larry) Moffatt Bowman of Sioux City, Scott (Misty) Moffatt of Sioux City, Brett (Rebeka) Moffatt of Akron, IA, Lori (Don) Harsma of Sioux City; 29 grandchildren; 19 great-grandchildren; siblings, Richard Moffatt of Akron, David (Rosie) Moffatt of Centennial, CO, Kevin (Jo) Moffatt of Westfield, IA; his dog, King; and many other relatives and friends. He was preceded in death by his parents; two sons, Mike Dicks and Tom Dicks; and two granddaughters, Alyssa Dicks and Paula Dicks.

The family of Lyle Dean Moffatt created this Life Tributes page to make it easy to share your memories.

Send flowers to the Moffatt family.