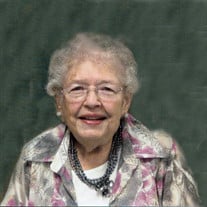 Lyall Avonne Hansen, 91, of Sioux City, died Saturday, Nov. 24, 2018, at a local care facility. Services will be 10 a.m. Friday at Faith United Presbyterian Church in Sioux City, with the Rev. David Koehler officiating. Burial will be in Memorial Park Cemetery. Visitation will be 4 to 8 p.m. today, with the family present 5 to 7 p.m. and a prayer service at 6:30 p.m., at Morningside Chapel, Christy-Smith Funeral Homes. Lyall was born in Fort Dodge, Iowa, on Sept. 7, 1927, the daughter of Gerald R. and Lyle A. (Walrod) Butler. She attended Fort Dodge Community Schools and graduated from high school in 1945. She then attended Fort Dodge Junior College, graduating in 1948. During this time, Lyall worked as a secretary for Boston Department Store in Fort Dodge. She was united in marriage with Farrell Hansen on Dec. 26, 1948 in Fort Dodge. In 1950, they moved to Clearwater, Fla. for a short time before returning to Fort Dodge. The couple moved to Sioux City in 1965. She began working at the American Heart Association in 1972, followed by Britton, Greenstone, Temple, and Thousand Insurance Agency. She worked at Postal Loan & Thrift and finally at Neumann, Monson, and Wictor Architects until she retired in 1999. Lyall was an active, long time member of Faith United Presbyterian Church, where she served in many roles including chancel choir member, Sunday School teacher, a charter member of the Clipper Club, a member of Presbyterian Women, Esther Circle, and served as a deacon. Her faith in God was very important to her. She was also a den mother for the Cub Scouts and was a longtime Scoutmaster's wife. A busy homemaker, she enjoyed reading, camping with her family and scouts, collecting recipes, doing crossword puzzles, and counted cross stitch. Her family was very important to her and she cherished the time she could spend with all of her family. Lyall is survived by her children, Linda Puttmann (Greg) of Pierson, Iowa, Paul Hansen of South Sioux City, Brian Hansen (Tina) of Sioux City, Susan Stoulil (Rick) of Austin, Minn., Keith Hansen (Eileen) of Sioux City; her grandchildren, Alicia Caspers (Brett), Kirk Puttmann (Sara), Jeff Hansen, Cheri Hansen, Daniel Hansen (Melissa), Michelle Hansen, Sarah Hansen, Marcus, Jason, and Amy Stoulil, David Hansen (Tiffany), and Alison Hansen; her 13 great-grandchildren; daughter-in-law, Lori Hansen of Sioux City, NE; and a sister, Marie Harter (Kenneth) of Pella, IA; sister-in-law, Marilyn Horvath of Elkhart, IN.; nephews, Bruce Butler and Blake Butler, both of Elkhart, IN., Brent Butler (Jana) of Des Moines, IA, Donald Butler (Emily) of Charlotte, NC; and niece, Laurie Suter of Tucson, AZ. She was preceded in death by her parents; her husband, Farrell on March 9, 2009; brothers, Roy Butler, and Charles Butler; her son, Alan; a sister-in-law, Verna Butler; and two grandchildren, Christopher Hansen and Carolyn Stoulil. Memorials can be directed to Faith United Methodist Church.

The family of Lyall A. Hansen created this Life Tributes page to make it easy to share your memories.