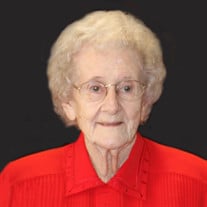 Lucille K. Eberly, 101, of Lawton, formerly of Sioux City passed away Tuesday, October 23, 2018 at Lawton after a brief illness. Services will be 10:00 a.m., Monday, October 29, 2018 at Community Presbyterian Church in Lawton, with Chaplain Lorna Peters officiating. Burial will be in Memorial Park Cemetery in Sioux City. Visitation with the family present will be Sunday, 2:00 – 4:00 p.m. at Christy-Smith Funeral Homes, Morningside Chapel. Christy-Smith Funeral Home is handling arrangements. Lucille was born December 13, 1916, in Hinton, Iowa, the daughter of Henry and Matilda (Bornholz) Junck. She attended country school in Plymouth County and graduated from Central High School in Sioux City. On September 1, 1939, she married Lawrence Eberly in Hinton, Iowa. They lived on a farm near Lawton for many years and then moved to Sioux City after retirement. Lawrence passed away February 21, 1996. Lucille was a member of Community Presbyterian Church in Lawton. She was a member of Ladies Aid and taught Sunday School for many years. Lucille was also a long-time member of UTD. She enjoyed gardening and her family. Survivors include her daughter, Dianne (Lloyd) Parks; grandson, Jason (Lora) Parks; and great-granddaughter, Ella. She was preceded in death by her husband; her son, Link; her parents; four sisters, Irene Vanderloo, Mildred Scherner, LaVaun Goodwin and Betty McNaughton; and four brothers, Frank, Clarence, Martin and Irvin Junck. In lieu of flowers, the family requests memorials be made to Hospice of Siouxland or Community Presbyterian Church.

Lucille K. Eberly, 101, of Lawton, formerly of Sioux City passed away Tuesday, October 23, 2018 at Lawton after a brief illness. Services will be 10:00 a.m., Monday, October 29, 2018 at Community Presbyterian Church in Lawton, with... View Obituary & Service Information

The family of Lucille K. Eberly created this Life Tributes page to make it easy to share your memories.

Send flowers to the Eberly family.