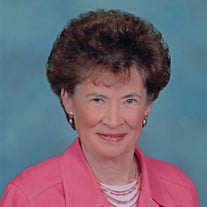 Lou Ann T. Benson, 84, passed into eternal rest with her family by her side on Wednesday, February 27, 2019, at Mercy Medical Center in Sioux City, IA. A visitation will be 9:30 a.m., Monday, March 4, 2019, at Christy-Smith Funeral Homes, Morningside Chapel, with the family present. A funeral service will follow the visitation at 10:30 a.m., Monday at Christy-Smith, Morningside, with burial to follow in Memorial Park Cemetery. Pall bearers will be her grandchildren. Born on May 18, 1934 to John and Mattie Burns, Lou Ann was one of six daughters. She graduated from Sioux City East High School and took some classes at Wayne State College. As a young woman, Lou Ann did some modeling, discovering her love of fashion. Lou Ann married and had four children. Being a mother and homemaker was her greatest joy and accomplishment. She loved spending time with her grandchildren, great-grandchildren and close friends whenever and as much as possible. She loved watching their sports activities and loved to watch a game on TV or listen to one on the radio. Lou Ann liked working in children’s fashions and enjoyed her work with Lutheran Social Services. She was a member of Mater Dei Parish-Nativity Catholic Church in Morningside. Lou Ann will forever be remembered for her faith, elegance and poise. Lou Ann is survived by her four children, son, Mike (Mitzi) Benson of Sioux City, and their children, Brett (Katie) Benson, Jessie (Harvis “Coco”) Cofield, Kristi (Travis) Bentz, and Ashley (Chase) Cleveland, daughter, Shelly (Dan) Curry of Sioux City, and children, Justin Sandy, Jason (Karley) Sandy, Jay J. (Courtney) Sandy, daughter, Linda Barthole Benson of Sioux City, and her children, Brady (Sarah) Barthole, Cody (Erica) Barthole, and Dustin “Boomer” Barthole (special friend: Lisa Dennis), daughter, Melissa (Kevin) Durst of Sioux City, and their children, Karli Durst and Kyle Durst; 15 great-grandchildren; a sister, Rita Tomlinson of Sioux City; and many other relatives and friends. She was preceded in death by her parents and four sisters, Mary Jane, Jean, Janice, and Judy. A special thank you to Mercy Medical ER and the ICU doctors and nurses, the staff at Pioneer Valley Living and Rehab, and her close friend, Carol, who took such good care of Lou Ann.

Lou Ann T. Benson, 84, passed into eternal rest with her family by her side on Wednesday, February 27, 2019, at Mercy Medical Center in Sioux City, IA. A visitation will be 9:30 a.m., Monday, March 4, 2019, at Christy-Smith Funeral... View Obituary & Service Information

The family of Lou Ann Teresa Benson created this Life Tributes page to make it easy to share your memories.

Send flowers to the Benson family.