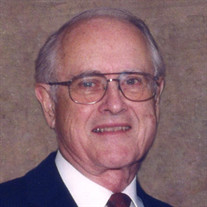 Loren G Wertz, age 91, of Sioux City died Saturday, December 1, 2018 at a local care facility. Funeral services will be held at 11:00 a.m., Thursday, December 6, 2018 at Faith United Presbyterian Church in Sioux City with Pastor David Koehler officiating. Burial will follow in Memorial Park Cemetery. A Visitation will be held on Wednesday from 4:00-8:00 p.m. with the family present 5:00-7:00 p.m. at Christy-Smith Funeral Homes, Morningside Chapel. Loren was born in Sioux City, Iowa on August 17, 1927, the son of S .Milton and Irma (McDowell) Wertz. He attended Sioux City Community Schools and graduated from East High School in 1945. He then entered the United States Army for 2 years. After his discharge he attended Iowa State University in Ames and graduated with a degree in animal husbandry. He was united in marriage with Bernadine Aronson on October 11, 1952. Bernadine preceded Loren in death on January 20, 2017 in Sioux City. Loren worked for his father at Wertz Feed Products in Sioux City until his father passed away, and then took over as manager and owner until he decided to semi-retire in 1989. He then worked part-time at Handyman in Sioux City until he fully retired at the age of 88. He was a member of Faith United Presbyterian Church and had served as a session member at different times and taught Sunday School. He is survived by his 2 sons, Clayton and his wife Kris of Omaha, NE., Bryon of Sioux City; and his daughter Lori Wertz and her husband Richard Bischoff of El Paso, Texas. He is also survived by his 3 grandchildren; 4 great-grandchildren; a sister, Shrylee Stanley of Grandbury, Texas; and several nephews, nieces, cousins, and his many friends. He was preceded in death by his parents; his wife, Bernadine; and his brother, Burton. The family requests in lieu of flowers that memorials in his name be made to Faith United Presbyterian Church.

The family of Loren Wertz created this Life Tributes page to make it easy to share your memories.

Send flowers to the Wertz family.