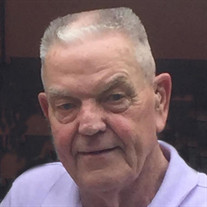 Loren Raymond Bush, 81 of Sioux City, Iowa died on Tuesday, May 26, 2020, at a local hospital. As a husband, father and grandfather, Loren deserves a beautiful tribute, so a Celebration of Life service will be held in August at St. Mark Lutheran Church with the date and time to be announced in the future. This is due to state and federal guidance on gatherings during the Covid-19 pandemic. Currently Visitation with the family will be from 12:00 PM to 2:00 PM on Saturday, May 30, 2020, at Christy-Smith Morningside Chapel, 1801 Morningside Ave., Sioux City, IA directly followed by a graveside service at Banner Township Cemetery at Lawton, IA with the Rev. David Halaas of St. Mark Lutheran Church, officiating. Online condolences may be made to the family at www.christysmith.com Loren was born September 6, 1938, to Raymond and Sophia (Baack) Bush. He grew up in Moville and Lawton and was a graduate of Lawton High School. He married Carol L Ebaugh on October 2, 1959 in Sioux City. Loren served in the Army from 1961 until 1963 being honorably discharged at Ft. Sill, OK. Loren and Carol returned to Sioux City where he began his employment with Dividend Bonded Gas and worked there for the next 26 years before becoming an agent for American Family Insurance for another 15 years, retiring in December of 2001. Loren enjoyed playing golf and cards, camping, fishing, reading western novels, traveling and bird watching. He especially enjoyed time with his family and friends. He was a proud member of St. Mark Lutheran Church for 50 years. An active member of the men's group, church council, and funeral lunch committee. He was often an usher, greeter, and all-around handyman. Survivors include his wife, Carol of Sioux City, son, Curt Bush and Jil McCorkindale of Sioux City, daughter, Lynn (Michael) Rossiter of Sioux City, four grandchildren; Michael Bush of Sioux City, Katie Bush of Sioux City, Elliott Rossiter of Cedar Falls, IA and Elizabeth (Shane) Rol of Dakota City, NE, one great grandchild, Nora Bush of Sioux City, brother, John (Linda) Bush of Lincoln, CA, two sisters-in-law, Noreen Ebaugh of Sioux City and Doreen Ebaugh of South Sioux City and many nieces and nephews. He was preceded in death by his parents, sister, Norma Jean and her husband Dale Harrison and two brothers-in-law, Brad Ebaugh and Bob Ebaugh. “In Lieu of flowers family requests memorial to St Mark Lutheran Church.”

Loren Raymond Bush, 81 of Sioux City, Iowa died on Tuesday, May 26, 2020, at a local hospital. As a husband, father and grandfather, Loren deserves a beautiful tribute, so a Celebration of Life service will be held in August at St. Mark... View Obituary & Service Information

The family of Loren Raymond Bush created this Life Tributes page to make it easy to share your memories.

Send flowers to the Bush family.