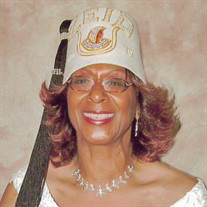 Lois M. Tate, 71, died Friday, September 3, 2021, at MercyOne Medical Center in Sioux City, IA. A memorial service will be 2:00 p.m., Monday, September 13, 2021, at Christy-Smith Funeral Homes, Morningside Chapel, 1801 Morningside Ave., with visitation one hour prior. Lois M. Tate was born June 19, 1950, in New Orleans, LA to the late Ignatius Harold Williams and Emelda Williams. She was a child of an active service member and traveled throughout the states along with several years in England. She spent most of her formative years in Omaha, NE. She later met and married Leroy Tate in 1967. Her memory will forever be cherished by her great family left behind. They include her spouse, Leroy Tate Sr.; two sons, Leroy Tate Jr. and Shawn A. Tate; sisters, Audrey Coleman of Houma, LA, Theresa Williams, Carolyn Williams, Sharon (Larry) Rogers, and Jackie (Angelo) McIntosh, all of Omaha, NE; brothers, Ignatius Harold Williams Jr., Alfred Williams, Michael Williams and Andre Williams of Omaha, NE. four grandchildren; three great-grandchildren; and host of nieces and nephews. Lois was preceded in death by her parents, Ignatius Harold Williams and Emelda Williams, and sisters, Joyce House and Rosalyn Williams. Lois loved to work for charitable organizations. She spent most of her adult life giving back to organizations especially working with the youth of our society. She worked with the youth in Omaha, NE and in her relocation to Sioux City, IA. Lois is now at peace with God and rejoicing in her new heavenly home. As we mourn let us rejoice in knowing that she lived a long and extraordinary life. Her favorite time was being with her grand and great-grandchildren. As Lois steps out of the fellowship of life, she is stepping into one room of our Father's House. There she will bask in the soft glow of eternity. As we mourn, let us remember the quote of the 23rd psalm and I will dwell in the house of the LORD forever.

The family of Lois Marie Tate created this Life Tributes page to make it easy to share your memories.

Send flowers to the Tate family.