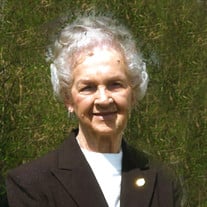 Lois M. Hansen, 99 of Sioux City, Iowa died on Tuesday, October 29, 2019, at Sunrise Retirement Community in Sioux City, Iowa. A Funeral service will be at 11:00 AM on Friday at Christy-Smith Morningside Chapel located at 1801 Morningside Ave. Sioux City, Iowa 51106 with the Rev. Del L. Olivier officiating. Interment will be in Memorial Park Cemetery, Sioux City, IA. The family will receive friends from 9:00 AM to 11:00 AM on Friday, November 1, 2019, at Christy-Smith Morningside Chapel, 1801 Morningside Ave., Sioux City, Iowa. Online condolences may be made to the family at www.christysmith.com Lois was born Saturday, July 31, 1920 in Sioux City, Iowa, to Adolph and Iva (Copenhaver) Fink. She grew up in Sioux City living with her grandparents during the school year. She graduated from East High School and went on to National Business Training school in Sioux City. Lois married Henry Hansen on April 28, 1945 in Sioux City. The couple took over the family farm from Henry's parents near Lawton. They moved in to Sioux City in 1962. Lois worked as a school secretary at Sunnyside School and at Anderson Abstract Company. She was a former member of Augustana Lutheran Church where she did quilting for over 20 plus years. She enjoyed raising flowers with Henry for the local florists, going to dances weekly and playing the organ. Survivors include her daughter in-law Carol Hansen of Sioux City, granddaughter Melissa (James ) Miller of Sioux City, great grandchildren; Ryan & his wife Emily Miller, Alyssa, Reese, Arianna and Rhett Miller all of Sioux City, along with several nieces and nephews. She was preceded in death by husband Henry, son Darrel, 2 sisters; Viola Lamb and Gladys Peterson and a brother Earl Fink.

Lois M. Hansen, 99 of Sioux City, Iowa died on Tuesday, October 29, 2019, at Sunrise Retirement Community in Sioux City, Iowa. A Funeral service will be at 11:00 AM on Friday at Christy-Smith Morningside Chapel located at 1801 Morningside... View Obituary & Service Information

The family of Lois Marie Hansen created this Life Tributes page to make it easy to share your memories.