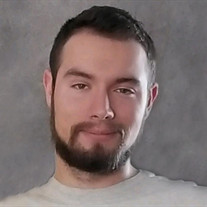 Logan Wold, 22, of Sioux City, IA, lost his battle with Epilepsy early Tuesday morning, October 22, 2019. Funeral services will be held at 11:00 a.m., Saturday, October 26, 2019 at Morningside Lutheran Church with Reverend Tom LoVan officiating. Burial will be at Emmanuel Lutheran Cemetery in Abercrombie, ND. Visitation will be held from 9:30 a.m. until service time on Saturday at the church. Morningside Chapel, Christy-Smith Funeral Home is handling local arrangements. Logan Robert Wold was born in Fargo, North Dakota to Jackie Bevre and Lynn Wold. He lived with his parents and brothers in Fargo until February 2003 at which time the family moved to Sioux City, Iowa as a result of his father taking a new job. Logan attended Sergeant Bluff-Luton community school from Kindergarten through 8th grade. The family then moved to a different home and he attend Lawton-Bronson community school for the rest of his high school years, graduating in 2016. Logan attended Western Iowa Tech and became a certified welder. During high school vo-tech classes he found great enjoyment working with metal and learning how to weld. Logan was a kind soul with a tender heart. He was an extremely loyal and dedicated friend. He would give the shirt off his back for his friends. He lived for helping others and always tried to pay it forward. Regardless of the unfortunate and unforgiving trials of life that were thrown at him, he always stood tall and got back on his feet and helped those up who were down around him. He was well known for the full beard he was able to grow as young as 14 years old. He had a great sense of humor and had begun dabbling with stand-up comedy in the past couple of years. Logan was also a very good marksman and enjoyed target shooting with his father, brothers and friends. Inspired by great minds such as Nikola Tesla and Albert Einstein, Logan was a creative and innovative thinker. He loved to build new and interesting projects that brought out his inner craftsman which are now cherished dearly by his family. Logan is survived by his mother, Jackie (Bevre) Barr; father, Lynn Wold; step-mother, Beth Wold; step-father, Matt Barr; brothers, Landon Wold, Parker Wold; step-sisters, McKenna Sitzmann, Taria Vollmer, Alyssa Barr; step-brothers, Carson Sitzmann, David Barr, Bradford Barr; maternal grandfather, Alden Bevre; paternal grandparents, Thomas and Bonnie Wold. Proceeded in death by his maternal grandmother, Dona Bevre and uncle, Chad Wold. In lieu flowers, the family requests memorials be made to the Epilepsy Foundation.

The family of Logan Robert Wold created this Life Tributes page to make it easy to share your memories.

Send flowers to the Wold family.