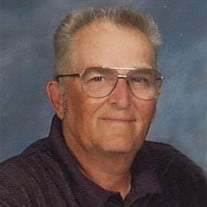 Lloyd Donald Groves, 80, of Sioux City, passed away June 11, 2019, following a brief illness. Services will be 10:30 a.m., Friday, June 14, at Mater Dei Parish – Immaculate Conception Catholic Church. The Rev. Dan Rupp will officiate. Burial will be in Memorial Park Cemetery following the service. Visitation will be Thursday, June 13, 4:00 to 7:00 p.m., with the family present, at the Morningside Chapel, Christy-Smith Funeral Home. The rosary will be recited at 6:30 p.m. followed by a vigil service at 7:00 p.m. Lloyd “Don” was born February 10, 1939, in Quimby, Iowa, the son of Lloyd and Eleanor (Reinert) Groves. He moved to Sioux City as a child and graduated from East High School in 1958. He then joined the United States Air Force. Don married Jean Abrao on October 22, 1960, in Santa Venetia, California. They returned to Sioux City in 1966. Don worked at McCracken Concrete Pipe Machinery Company in Sioux City for 28 years. He was also a member of the Woodbury County Sheriff’s Department Reserves for 25 years. Don was an active member of Mater Dei Parish- Immaculate Conception Catholic Church. He loved hunting and fishing with his family and golfing with his many friends. After retirement, Don and Jean enjoyed spending their winters in Alamo, Texas. He is survived by his wife, Jean of Sioux City; a daughter Lori (David) Arnold of Sioux City; sons, Donnie (Melinda) Groves of Bronson, and Chris (Stephanie) Groves of Sergeant Bluff; eight grandchildren, Ryan, Tim and Matt Arnold, Kristen, Meggan, Adam, Ashlyn and Conner Groves; three great-grandchildren, Cadence Arnold, Riley and Cameron Groves; and many nieces and nephews. Don was preceded in death by his parents; and his sisters, Ruth Kern and Dolly Sanvold.

The family of Lloyd "Don" Groves created this Life Tributes page to make it easy to share your memories.

Send flowers to the Groves family.