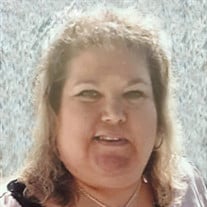 Lisa Kay Stowe, 51, of Sioux City passed away November 13, 2018, after losing her battle to several health conditions at Mercy Medical Center. Lisa was born on December 26th, 1966, in Sioux City, IA to Barbara (Stowe) Lovegreen. She attended East High School and graduated class of 1986. She later attended college at WITCC with a degree in Welding. She worked for Broyhill, a welding company in Dakota City, for a brief time and realized that wasn’t the path she wanted to take. She wound up working several customer service jobs in the Siouxland area, which she was meant to do because of her bright and amazing personality and smile. Her hobbies included scrapbooking and making cards & gifts with her huge collection of stamping tools. She also had the biggest heart for animals and wanted to bring anything and everything home with her. Her biggest pride and joy in life was having her son, Jeffrey, who brought her years of happiness and then 26 years later, she then became a grandma to her granddaughter, Amara, about whom she always said “give me my baby”. Survivors include her mother, Barbara Lovegreen of Sioux City; son, Jeffrey Stowe and Luisa Velaszques of South Sioux City, NE; granddaughters, Amara Stowe, Bianka, and Brianna; brothers, Joe and Kathy Stowe of Sioux City and Jim and Angie Osborn of Sioux City; sisters, Dawn Lorius of Overland Park, KS and Lori and Doug Daniells of Duluth, MN; and her boyfriend, Dan Cummings of Sioux City; aunt, Bev Bates of South Sioux City, NE; cousins, Marie Mitchell of Moville, IA, Brian and Joey Masio of Council Bluff, IA; second cousin Rachel Quigley of Omaha, NE; and many other family and friends. She was preceded in death by her father, grandmother, and brother, Tim Lovegreen. There will be no funeral service but there will be a Celebration of Life on a date to be determined and will be created with a Facebook event.

The family of Lisa K. Stowe created this Life Tributes page to make it easy to share your memories.

Send flowers to the Stowe family.