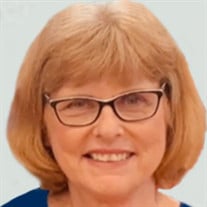 Linda R. Mize, age 65, of Bronson, passed away Wednesday, June 15, 2022, after battling a lengthy illness. A celebration of life will take place on Wednesday, June 22, 2022, from 4:00-7:00 p.m. at the Bronson City Park Shelter House in Bronson, IA. Christy-Smith Funeral Homes, Morningside Chapel is assisting the family with arrangements. Linda was born on July 3, 1956, in Sioux City. She attended Woodbury Central High School and graduated in 1974. She then attended Morningside College and graduated with a degree in education. On May 27, 1989, Linda married Greg Mize. In 1993 she began teaching in the Sioux City Community School District where she touched so many lives. She retired in 2018. Linda enjoyed four wheeling, bicycling, and RAGBRI with her husband, Greg. She also enjoyed attending her grandchildren’s events along with spending time with her family and friends. During her retirement she enjoyed substitute teaching and having coffee with friends. She is survived by her husband, Greg Mize; children, Missy and Andre Humphrey, Candice and Joshua Climer, Ken Petersen and fiancé Andie Harman, JJ and Danielle Petersen; grandchildren, Isaiah, Jalen, Aliyah, Claire, Emily, Max H., Kaden, Max C., Marcy, and Reed; brother, John and Sheila Cox; along with many other family members. She is preceded in death by her parents, James and Fauneil Cox; sister, Patricia and Michael Botdorf. In lieu of flowers donations may be made to St. Croix Hospice.

The family of Linda Rose Mize created this Life Tributes page to make it easy to share your memories.

Send flowers to the Mize family.