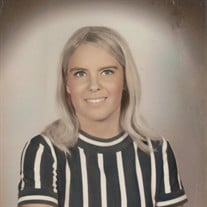 Linda Joy Halfrich, 71 of Sioux City, Iowa passed away peacefully March 2, 2022, at a local nursing home in Sioux City, Iowa. A Funeral service will be at 12:00 PM on Monday, March 7th at Christy-Smith Morningside Chapel located at 1801 Morningside Ave. Sioux City, Iowa 51106 with Pastor Neil Peck officiating. Interment will be in Memorial Park Cemetery, Sioux City, IA. Visitation with the family will be from 11:00am until service time on Monday Online condolences may be made to the family at www.christysmith.com Linda was born November 29, 1950, in Sioux City, Iowa; to Wendell and Goldie (Chapman) Borcherding. She grew up in Sioux City and graduated from East High School in 1969. Linda married her high school sweetheart, Gordon Halfrich on August 8, 1970. During her life, she lived it to the fullest as a mom and a great cook. She was famous for her chocolate cake, potato & dumpling soup, and French toast. Linda would make each of her children whatever they wanted for breakfast before they left for school and after school the kids with their friends would always come over for her Kool-Aid and cookies. As a mom she made sure her kids were able to participate in sports and other activities that they were interested in. She enjoyed watching I Love Lucy, the Price is Right, and The Wizard of Oz. Linda was a die-hard Chicago Cubs baseball fan and when they won the World Series she was elated. Linda was an avid caller to KSUX, when they had the call-in program to win tickets or other gifts. The station was always on in her house so she wouldn’t miss the chance to call in. She won so many times that she had a China cabinet dedicated to her winnings from over the years. Linda enjoyed being a wife, mom, grandma, and great grandma. She loved to spend time with all her family. Linda is survived by her daughters, Carrie-An (Doug) Price, Michelle (Jason) Berg; her son, Bryan (Stormi) Halfrich; seven grandchildren, Ashley (Kevin) Bradbury, Priscilla (Tyler) Price, Chaeli Dawdy, Dustin Price, Jocelyn (Dalvin) Berg, Sydney (Tristen) Berg, and Grayson Halfrich; ten great-grandchildren, two sisters, Debbie (Dale) Frisch and Kathy (Elias) Martinez; brother in-law Marty Neswick, brother in-law Bill (Vicki) Halfrich, numerous nieces and nephews and her pup Louie. She was preceded in death by; her husband, Gordon, an infant son, Gordon Jr. (GJ), her parents, a sister; Dixie Neswick, and two nephews; Justin Halfrich and Chad Hutzell.

The family of Linda Joy Halfrich created this Life Tributes page to make it easy to share your memories.

Send flowers to the Halfrich family.