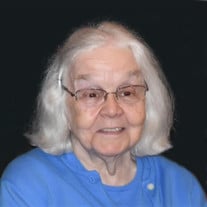 Lila Norene Weber, 88, of Sioux City died Monday December 17, 2018 at a Sioux City hospital. Per her wishes, she has been cremated and a private family Memorial Service will be held in May near the first anniversary of her husband’s death. Christy-Smith Funeral Homes, Morningside Chapel is facilitating the arrangements. Lila was born on October 16, 1930 on the family farm near Smithland, Iowa, the daughter of William Irvin Larson and Hazel Rader. She attended Smithland Schools and graduated as Valedictorian of the class of 1948. She was united in marriage with Cecil E Weber on June 18, 1950 at the Smithland United Methodist Church. Mr. Weber preceded her in death on May 6, 2018. They considered Sioux City their lifelong home. In 1951, Cecil was drafted into the armed services and Lila was lucky enough to go with him to Fort Leonard Wood, Missouri, where she became employed at C.F. Lytle Company. When Cecil was discharged the couple moved back to Sioux City where Lila was a homemaker. In 1971 she started a daycare business in her home which she continued for more than 35 years. She was a member of Wesley United Methodist Church for almost 70 years. She is survived by her brother Arlis Larson, and sister Carol Bolles, four children: Lynn Weber and his wife Christina, Dena Kozak and her husband Chris, Roland Weber, and Fred Weber, her eight grandchildren: Ryan Weber and his wife Shelly, Justin Weber and his fiancée Nancy Anderson, Christopher Pappadackis and his wife Joslyn, Stephanie Pappadackis, and her boyfriend Michael Hammel, Alex Weber, Elizabeth “Libby” Weber, Jordan and Jenna Weber. She is also survived by five great-grandchildren: Levi Pappadackis, Mia Weber, Lincoln Pappadackis, Kristopher Wertz, and Shawn Fitch. She was preceded in death by her parents, her husband, and two sisters Beverly (Bev) Moller and Judy Rhodman. In Lieu of flowers, the family requests that Memorials be made to the family for designation at a later date.

Lila Norene Weber, 88, of Sioux City died Monday December 17, 2018 at a Sioux City hospital. Per her wishes, she has been cremated and a private family Memorial Service will be held in May near the first anniversary of her husband&#8217;s... View Obituary & Service Information

The family of Lila Norene Weber created this Life Tributes page to make it easy to share your memories.

Send flowers to the Weber family.