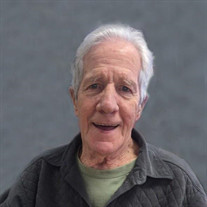 Leland W. “Lee” Kinnaman, 84, formerly of Sioux City, IA, died Tuesday, September 11, 2018, surrounded by his family at Legacy Garden Rehab and Living Center in Pender, NE. A visitation will be 2:00 pm to 6:00 pm Friday, September 14, 2018, at Christy-Smith Funeral Homes, Morningside, with a Time for Sharing from 5:00 pm to 6:00 pm. Leland Ward “Lee” Kinnaman, the son of Scott and Sylvia (Ryan) Kinnaman was born August 26, 1934, in Hornick, IA. He attended school in Sioux City. Lee then went to work for Meyer Beef. During this time, Lee was united in marriage with Faye Webb. They were together for 20 years, and had three sons, Bill, Randy, and Steve. Lee was employed at Mc Cracken-Concrete Pipe as a welder. In 1972, he was united in marriage with Glenda Marcoe in Sioux City. She had four children from a previous marriage, Mike, Laurie, Karen, and Danny, and they had one more son, Rick. After his retirement as a welder, Lee was employed for the South Sioux City, NE school system as a janitor. Glenda died in January of 2006. Lee was a Boy Scout as a child and a Scout Master in later years. He enjoyed collecting antique cars, spending time with his family and friends, and being with his beloved dog, George. Lee is survived by his children, Randy Kinnaman of Emerson NE, Mike (Sue) Bubb of Sioux City, Laurie (Justin) Petersen of Le Mars, IA, Karen (Brad) Binnebose of Sioux City, Danny Bubb of Sioux City, Rick (Michelle) Kinnaman of Sioux City; 14 grandchildren, Trish, Cheryl, Travis, Samantha, Adam, Kyle, Hank, Missy, Steven, Megan, Paige, Drew, Ryan, and Kale; eight great-grandchildren, Anthony, Hannah, Kota, Zoe, Aisen, Colton, Sophie, and Ryker; and many other relatives and friends. Lee was preceded in death by his parents; wife, Glenda; two sons, William and Steve Kinnaman; a daughter-in-law, Trisha Kinnaman; two brothers, Leo and Bud Kinnaman; and a sister, Ilene.

The family of Leland W. "Lee" Kinnaman created this Life Tributes page to make it easy to share your memories.

Send flowers to the Kinnaman family.