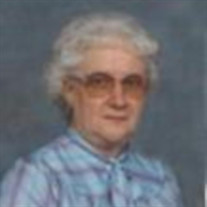 Lela Mae Williams, age 88, of Sergeant Bluff died on Saturday, October 10, 2020 at her residence Funeral services will be held at 1:00 p.m., Thursday, October 15, 2020 at Salix Community United Methodist Church in Salix, with Pastor Catie Newman officiating. Burial will follow at Memorial Park Cemetery. Visitation will be held on Thursday from noon until service time at the church. Christy-Smith Morningside Chapel is handling the arrangements. Online condolences can be left at www.christysmith.com. Lela was born at Owego, Iowa on April 6, 1932, the daughter of Everett and Lydia Edna (Cobb) Lines. She attended school at Owego and graduated from Sergeant Bluff High School in 1950. She was united in marriage with Robert J. Williams on August 30, 1951 at her parents’ home in Sergeant Bluff. The couple made their home in Sioux City until 1971 when they moved to Sergeant Bluff. She formerly worked at a creamery in Sioux City, as well as a local dime store and as a bank teller at two different banks in the Morningside area. She then served as the church secretary at Community United Methodist Church in Sergeant Bluff for ten years before her retirement. Lela was a current member of Salix Community United Methodist Church and a member of the UMW at Community United Methodist Church in Sergeant Bluff. She enjoyed sewing and was a talented quilt maker, She also enjoyed crossword puzzles, playing cards, and spending time with her family. She is survived by her husband of 69 years, Bob; her sister-in-law, Judy Lines- McFadden of Battle Creek, MI; brother-in-law, Donald (Virginia) Williams of Grandview, WA; sister-in-law, Barbara Slocum of San Antonio, TX; sister-in-law, Mae Williams of Sergeant Bluff;, brother-in-law, Hank Grillet of Burlington, WA; her special nephew, Randy Williams of Sioux City; her cousin, Carmen Cobb of Sioux City; and many more nieces and nephews. She was preceded in death by two children in infancy, Jerry and Teresa; her parents; a sister, Frances Rickabaugh; and a brother, Garry Lines.

The family of Lela M. Williams created this Life Tributes page to make it easy to share your memories.