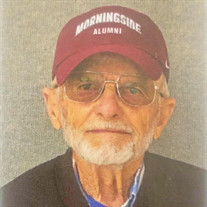 Lee B. Jarvis, 87 died on Friday, February 4, 2022, at Unity Point Health St. Luke's in Sioux City, Iowa. A Celebration of Life service will be at 10:30 AM on Saturday, February 12, at the Hinton United Methodist Church with the Rev. Beth Odor officiating. A private family graveside service will be held at a later date at the Graceland Park Cemetery Columbarium, Sioux City, IA where Lee’s and his wife Nancy’s urns will be placed in their niche touching for eternity. Visitation will be from 4:00 PM to 7:00 PM on Friday, February 11, 2022, at Christy Smith Larkin Chapel, 2320 Outer Drive, Sioux City, Iowa. Online condolences may be made to the family at www.christysmith.com The Celebration of Life service will be live streamed on the Hinton & Melbourne UMCs Facebook page. Lee was born May 30, 1934, in Bradgate, IA to Paul and Genevieve (Beam) Jarvis. He graduated from Livermore High School in 1952. He then worked on his father’s farm and enlisted in the Iowa Army National Guard. During his thirteen years in the Guard, he attended NCO schools and basic artillery officers training. On August 10, 1958, he married Nancy Mackintosh, daughter of Hartley and Grace Mackintosh of Livermore. To this union, one daughter and three sons were born. After their marriage, they moved to Sioux City and Lee enrolled at Morningside College. He graduated in 1962 with a major in business administration and a minor in livestock marketing and history. Lee then worked as a cow buyer for Swift and Sioux City Dressed Beef at the Sioux City Stockyards. In 1965 the family moved to a small farm near Hinton. Then in 1969 Lee quit working for Sioux City Dressed Beef and started cattle feeding and swine raising operation at his small farm. He retired in 1996 but continued to live on the farm. After retirement he and Nancy did a lot of traveling and attended Morningside College as well as high school events. Morningside College and the Sioux City, Hinton area had a special place in Nancy and Lee’s heart. They were extremely glad that they had spent their life together in this area. They considered it a wonderful place to raise their family and make new friends. Lee was a member of the Hinton United Methodist where he held various offices and participated in different church activities. Lee enjoyed making new friends, reading and was proud of his children, grandchildren, and great grandchildren. Survivors include three sons, Steven Jarvis of Peterson, IA, David and Deanna Jarvis of Sioux City, and Brent and Nicole Jarvis of Hinton; son-in-law, Doug Toliver of Sac City; seven grandchildren, Laina and Matt Edwards, Jamie and Ryan Stapleton, Mitchel Jarvis, Mac Jarvis, Marcus Jarvis, Austin Jarvis, and Haylee Jarvis; and four great-grandchildren, Jack Edwards, Leo Edwards, Quinn Stapleton, and Luka Stapleton. Lee was preceded in death by his wife, Nancy; a daughter, Kim Toliver; his parents; his mother and father in-law, Grace and Hartley Mackintosh; and a sister, Paula Yeager. To all my friends and acquaintances. In Micah chapter six verse eight it says….” the Lord has told us what is good, what he requires of us is this: to do what is just, to show constant love and to live in humble fellowship with our God.” (Everyone’s God may be a little bit different) In other words, he is telling us to accept and celebrate all people for who they are. .

Lee B. Jarvis, 87 died on Friday, February 4, 2022, at Unity Point Health St. Luke's in Sioux City, Iowa. A Celebration of Life service will be at 10:30 AM on Saturday, February 12, at the Hinton United Methodist Church with the Rev.... View Obituary & Service Information

The family of Lee Jarvis created this Life Tributes page to make it easy to share your memories.

Send flowers to the Jarvis family.