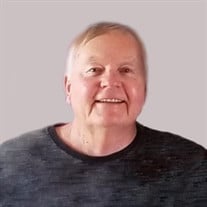 Larry L. Lewis, 70, of Sioux City, IA, passed away peacefully on Friday, December 3, 2021, surrounded by his family. A Funeral service will be at 10:00 AM on Friday, December 10th at the Community Presbyterian Church located at 417 E. Birch Lawton, Iowa 51030 with the Pastor Ken Meissner officiating. Interment will be in Memorial Park Cemetery, Sioux City, IA. Visitation will be from 5:00 PM -7:00 PM on Thursday, December 9 and a prayer service will begin at 7:00 PM. with Pastor Ken Meissner located at Christy-Smith Funeral Homes Larkin Chapel located at 2320 Outer Drive in Sioux City, Iowa. Online condolences may be made to the family at www.christysmith.com Larry was born May 13, 1951, in Sioux City, Iowa. He grew up in Bronson and graduated from Lawton Bronson High School in 1969. He married Sheryl D. Jessen on May 22,1971 in Sioux City. He worked as a journeyman in metal fabrication with Fabricators for 4 years and then served as the union business agent for the Sheet Metal Workers Union, local # 3. He later started his own business “Metal Specialist” located in Sioux City, which he owned and operated for 27 years before retiring. He was a member of Elliott Creek Presbyterian Church in Bronson. His hobbies included camping and playing cards with his family and friends. Survivors include his wife, Sheryl D. Lewis of Sioux City; son, Brad (Angela) Lewis of Sergeant Bluff, IA; daughter, Brenda (Wes) Gilster of Grimes, IA; 6 grandchildren, Braden, Abby, Tristan, Sheridan, Ryan, and Rhiannan; 2 sisters, Linda (Gene) Kollbaum of Bronson, Patricia Gordon of Albuquerque New Mexico; and numerous nieces and nephews. He was preceded in death by his parents, Loren and Virginia (Cox) Lewis.

Larry L. Lewis, 70, of Sioux City, IA, passed away peacefully on Friday, December 3, 2021, surrounded by his family. A Funeral service will be at 10:00 AM on Friday, December 10th at the Community Presbyterian Church located at 417... View Obituary & Service Information

The family of Larry L. Lewis created this Life Tributes page to make it easy to share your memories.

Send flowers to the Lewis family.