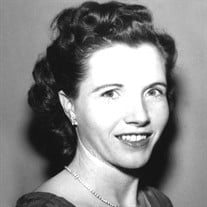 LaVon E. Speed, 96, died Thursday, February 27, 2020, at her residence in Sioux City, IA. A funeral service will be 2:00 pm Wednesday, March 4, 2020, at Christy-Smith Funeral Homes, Morningside Chapel, 1801 Morningside Ave. with visitation one hour prior. Burial will be in Grandview Cemetery in Fayette County, IA. Online condolences can be left for the family at www.christysmith.com LaVon Edna Pettit, the daughter of Willie and Emma “Susan” (Carlton) Pettit was born September 4, 1923, in Fayette, IA. She received her education in Fayette County. On January 4, 1940, LaVon was united in marriage with Rayburn Milks. She moved to Los Angeles, CA in 1954, where she received her nursing training. LaVon worked for Hughes Aircraft, Bill Bailey Investigations, and in the Emergency Room at Victor Valley Hospital. She eventually cared for elderly people in her home. Rayburn died in 1983. LaVon moved to Oklahoma in 1995 to be near her daughter and grandchildren. On October 27, 1997, she was united in marriage with LeRoy Speed. The couple moved to Sioux City in 2006. LeRoy died May 14, 2008. LaVon enjoyed embroidery, crocheting, reading, and going to Flea Markets. Early in life, she loved to prepare food, and later in life, enjoyed eating other people’s cooking. LaVon is survived by two daughters, Geraldine “Jeri” Marston of Sioux City, Darlene (Jim) Coover of Sioux City; a step-daughter, Freda (Pat) Phelan of Arizona; seven grandchildren; 11 step-grandchildren; 13 great-grandchildren; and many other relatives and friends. She was preceded in death by her parents; husbands; an infant daughter, Patricia Milks; five infant grandchildren; and her siblings, Leona Speed, David Pettit, Frank Pettit, Edward Pettit, William Pettit, and John Pettit. The family wishes to thank Hospice of Siouxland, specifically Teresa the Nurse, Bethany the Social Worker, and the volunteer, Kaye. They also have deep gratitude for Recover Health, specifically Sheena, Charise, and Lori.

The family of La Von Edna Speed created this Life Tributes page to make it easy to share your memories.

Send flowers to the Speed family.