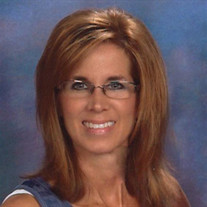 Kim Rochelle Dalke of Phoenix, Arizona, formerly of Sioux City, passed away early Saturday morning, August 10, 2019 at the Mayo Hospital in Phoenix, Arizona after a short duration of leukemia and pneumonia. She reached the age of 50 years, 9 months, and 18 days. Funeral Service will be at 10:30 a.m., Monday, August 19, 2019 at Morningside Chapel, Christy-Smith Funeral Homes, 1801 Morningside Ave, with Pastor Jason Van Wyk from Peace Reformed Church will officiate. Visitation will be 5:00-8:00 p.m., with Prayer Service 7:00 p.m., Sunday, August 18, at Morningside Chapel, Christy-Smith Funeral Home. Burial will be at Memorial Park Cemetery. On-line condolences maybe left at www.christysmith.com. Kim Rochelle (Feldhacker) Dalke was born October 23, 1968, in Spencer, Iowa, the second born daughter of Edward Raymond and Elaine Beth (Meerdink) Feldhacker. She was baptized and confirmed in the Catholic faith, and became a born again Christian at an early age, accepting Jesus Christ as her personal Savior. Kim grew up in Spencer attending Sacred Heart elementary school through the fourth grade. In August 1979, the family moved to Cherokee, Iowa, where she attended fifth grade, completing her education at Washington High School. She was a member of the National Honor Society and graduated on May 31, 1987 from her class of 101 students as salutatorian of her class. She was a humble person who never expected accolades for any of her achievements, recognition of merit, or accomplishments. She was very active in the church serving in the Immaculate Conception youth group, singing in the church choir offering her services as a lector, and participating and leadership in many Quest and Teen Encounter Christ retreats. She worked at two part time jobs during high school. Kim's interest in nursing became evident early on in grade school when the study of the human body fascinated her. She always knew she would pursue the medical field, and acquired the love and compassion of helping others. She set her future endeavor high as a nurse, and her greatest reward was to help relieve suffering, and to save lives. She was an avid reader, and exceptionally studious. Her dream was imperative to reach for higher goals in life, fulfill her dreams, and not settle for mediocrity. She was a State of Iowa Scholar, and accepted the Briar Cliff University Presidential scholarship in 1987. Four years later, she received her BSNRN degree in nursing on May 18, 1991, with the distinction of cum laude. She was a member of the Sigma Theta Tau International Nursing Honor Society. Kim was united in marriage to Richard (Rick) F. Hicks on May 2, 1992 in Sioux City. One son, Cory Andrew Hicks was born to this couple. This marriage ended in a divorce. She was united in marriage to William (Bill) Lee Dalke on March 7, 1998 in Sioux City they recently celebrated 21 years of marriage. Her first job as a nurse came on February 1, 1991, at Marian Health Center, now known as Mercy One in Sioux City. She worked as a staff nurse on the Post Critical Care Unit on the 6th floor. After four years in that position in May of 1995, Kim was promoted from that position to Assistant Supervisor for the 3 to 11 p.m. shift on Post Critical Care. On November 21, 1996, she became employed at the Sioux City Allergy and Asthma Associates working 8 to 5 for Dr. James D. Oggel and Dr. Christopher Tumpkin, working in that position for almost 18 years until August 2014. She challenged herself and her dream to venture out for something different. Mayo Clinic in Scottsdale, Arizona hired her, they sold their home in Sergeant Bluff and moved to Phoenix, starting her new job on August 25, 2014. Kim worked in the Radiology Department. Further job advancement came on January 13, 2016 when she was promoted to the new Mayo Clinic Phoenix Campus in the Proton Beam Building working as a Breast Imaging Nurse Navigator. This job she held until her passing. Kim touched the hearts of the Mayo Clinic community, the patients she cared for, and the friends who knew her. Her outside and inner beauty, joy of life, and strength was reflected in her beautiful smile. She was diagnosed with a pre-leukemia condition in May 2018, but Kim never lost her determination to beat the disease; she remained positive, and held onto her strong faith in the Lord. She knew that God had an ultimate plan for her life and she was at peace with that. In the end, she fought courageously, optimistically, and full of grace. Kim is survived by her husband, Bill of Phoenix; her son, Cory Hicks of Phoenix; her parents, Edward and Elaine Feldhacker of Oakland, Iowa; her step children, Chelon (Mike) Busch, and Wade Dalke of Sioux City; her step grandchildren, Allie, Will and Makayla Busch of Sioux City; her brother-in-law, Matt Alexander, nephew, Austin Alexander, and niece, Abby Alexander, all of lda Grove, Iowa; brother-in-law, Tom (Dody) Dalke of Sioux City; and several uncles, aunts, and cousins. She was welcomed into Heaven by her two sisters, Tamara (Tami) Kay Feldhacker, and Brandee Marie Feldhacker Alexander; her paternal grandparents, Raymond and Vernice Feldhacker; her maternal grandparents, Wilbur and Harriet Meerdink, and her father-in-law and mother-in-law, Clarence "Jack" and Rozella "Kitty" Dalke; and brother-in-law, Robert Dalke.

Kim Rochelle Dalke of Phoenix, Arizona, formerly of Sioux City, passed away early Saturday morning, August 10, 2019 at the Mayo Hospital in Phoenix, Arizona after a short duration of leukemia and pneumonia. She reached the age of 50 years,... View Obituary & Service Information

The family of Kim Rochelle Dalke created this Life Tributes page to make it easy to share your memories.

Send flowers to the Dalke family.