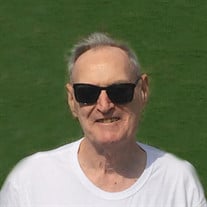 Kenneth E. “Ken” Finken, 82, of Sioux City, died Tuesday, April 9, 2019, at the University of Nebraska Medical Center in Omaha, NE. A visitation will be 4:00 pm to 7:00 pm Friday, April 12, 2019, at Christy-Smith Funeral Homes, Larkin Chapel, with the family present from 5:00 pm to 7:00 pm and a prayer service at 7:00 pm. A funeral mass will be 10:30 am Saturday, April 13, 2019, at Holy Cross Parish-Blessed Sacrament Church with burial to follow in Calvary Cemetery. Kenneth E. “Ken” Finken, the son of Tom Jr. and Hazel (Deuel) Finken was born January 7, 1937, in Logan, IA. He graduated from high school in Missouri Valley, IA in 1955. Ken was active in the U.S. Army for two years before his honorable discharge. He then went to work for the State of Iowa in the Roads Department. On Sept. 23, 1961, Ken was united in marriage with Margaret Rohret at St. Peter Catholic Church in Cosgrove, IA. The couple lived in Council Bluffs, IA, and moved to Sioux City in 1969. He worked in construction, welding, and other manufacturing jobs. Ken was then employed with Wilson Concrete for 20 years until his retirement in 1999. Margaret died February 20, 2016. Ken was an active member of Blessed Sacrament Catholic Church. He attended daily Mass and had many parish friends. Ken volunteered at the church to help with upkeep of the lawn and garden and was also an usher for many years. He enjoyed gardening, hunting, and watching the Iowa Hawkeyes. Ken’s grandchildren were very special to him, and as he once shared with his oldest, “Work hard, be fair, and love God.” Ken lived this advice, a wonderful example to his family and friends. Ken is survived by three children, Neal (Janet) Finken of Bennington, Neb., Sandy (Joe) Stegge of Le Mars, Iowa, and David (Laura) Finken of Omaha; six grandchildren, Kevin Olson, Emma and Claire Finken, Sarah, Thomas and Michael Stegge; and many other relatives and friends. He was preceded in death by his parents; wife, Margaret; brothers, Donald, infant brother, Art, Elmer, Herb, Dean, Wayne, Rich, Phil, and John; and sisters, Vivian and Evelyn.

The family of Kenneth Eugene Finken created this Life Tributes page to make it easy to share your memories.

Send flowers to the Finken family.