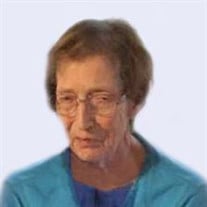 Karen June (Carrell) Snyder,72, went home to be with her Lord on January 29, 2020. She died quietly in her sleep with her husband Kenneth “Skip” Snyder by her side. A memorial service will be 1:00 pm Thursday, February 6, 2020, at Christy-Smith Funeral Homes, Morningside Chapel, 1801 Morningside Ave., with visitation one hour prior. Karen June Carrell was born June 9, 1947, in Omaha, NE. She was a twin, the seventh child of eight born to Robert and Florence (Roush) Carrell of Moville. She attended school at Smithland, Climbing Hill and Moville. Karen met Ken “Skip” Snyder and they were married in 1984. She was a mother to two boys and one stepdaughter. Skip was a truck driver and Karen traveled with him, eventually getting her CDL license and becoming a truck driver. She was a hard worker her whole life and enjoyed baking, gardening and spending time with her children and grandchildren. In her spare time, she embroidered sets of dish towels for family members and friends. Karen of a member of Rustin Avenue Methodist Church and the Order of the Eastern Star. Those left to cherish her memory are her husband, Skip of Sioux City; 2 sons, Robin Sturgeon of Guthrie Center, IA and James Sturgeon of Sioux City; stepdaughter Theresa Snyder of Sioux City; 11 grandchildren; two great-grandchildren; her siblings, Joyce (Phillip) Sanderson of Hornick, IA, Roy (Patty) Carrell of Sioux City, LaVonne “Bonnie” Johnson of Moville, IA, Sharon (Bill) Leaverton of Sioux City; a sister-in-law, Bert Snyder; and many nieces and nephews. She will be missed by many. She was preceded in death by her parents; brother, Marvin Carrell; and two sisters, Arlene Plummer and Barbara Larson.

The family of Karen June Snyder created this Life Tributes page to make it easy to share your memories.

Karen June (Carrell) Snyder,72, went home to be with her Lord...

Send flowers to the Snyder family.