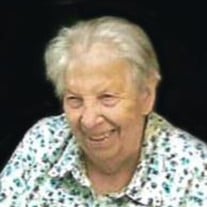 Karen J. Mahan, 85, passed unexpectedly Saturday, April 24, 2021, at MercyOne Medical Center in Sioux City, IA. A service will be held at a later date. Christy-Smith Funeral Homes, Morningside Chapel, is assisting the family with arrangements. Karen Mahan, the daughter of Clarence and Agnes (Scofield) Mahan was born July 26, 1935 in Sioux City, IA. She graduated from East High School in 1953. Karen held various jobs, but mostly worked at Toy National Bank for 25 years until her retirement. Karen had a love of reading and going to coffee with friends and family. She also played a huge role in the raising of three of her nephews, Wes, Mike, and Rusty. Clayton, her nephew, said it best, “If you ask Karen a question, you better be prepared for an honest answer!” Karen was preceded in death by her parents, Clarence and Agnes; six siblings, Earl, Bill, Dixie, Mod, Mignon, and Fabian; two brothers-in-law; and a niece and a nephew. Karen was loved and will be truly missed.

The family of Karen J. Mahan created this Life Tributes page to make it easy to share your memories.

Send flowers to the Mahan family.