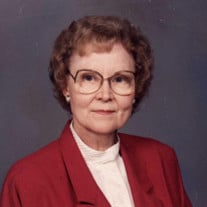 Karen Marie Clatterbuck, 97, of Sioux City, Iowa passed away at a local nursing home Monday, September 23, 2019. Funeral services will be held at 12:00 Noon, Thursday, September 26, 2019 at Morningside Chapel, Christy-Smith Funeral Homes with burial following in Memorial Park Cemetery. Visitation will be held one hour prior to the service on Thursday at the funeral home. Karen Marie Clatterbuck was born on September 17, 1922 in Wagner, South Dakota. She was the daughter of Jens and Kristina Nielson. She lived on a farm with her father and two brothers. Her mother had passed away when she was only five years old. She graduated from Wagner High School in 1940. After graduation she attended St. Paul Bible Institute. She later came to Sioux City and went to National Business Training School. Her first job was in the office of Swift & Co. On December 18, 1948 she was married to Willard B. Johnson who passed away on December 27, 1950. His son Douglas Johnson was only a year old at that time. She always loved to travel. Her father and young son went with her on an ocean voyage to Denmark to meet all the family that had not come to the U.S. They spent eleven weeks on this trip which was taken in 1954. On June 15, 1963 she was married to Lyle Clatterbuck who passed away on September 18, 2000. During her years she worked in several offices. Her last office work was at Terra Chemical Intl. in the accounting office. After 16 years she retired from there in August 30, 1983. She was an active member of the So. Hills Baptist Church since 1968. She is survived by her son, Douglas B. Johnson and his wife Jeanne; a stepdaughter, Pamela Sydow and her family; and several nieces and nephews and their children. There are many family members still living in Denmark. She was preceded in death by her parents, Jens and Kristina Nielsen; brothers, Dennis Nielsen and George Nielsen; 2 husbands, Willard B. Johnson and Lyle K. Clatterbuck. The family suggests that memorials be made to the Southern Hills Baptist Church here in Sioux City.

The family of Karen M Clatterbuck created this Life Tributes page to make it easy to share your memories.

Send flowers to the Clatterbuck family.