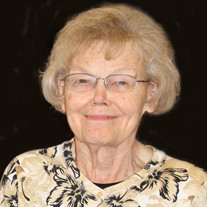 Katherine Jean Brennan, 85, of Holstein, formerly Sioux City, died Wednesday, Dec. 5, 2018, at Cherokee Regional Medical Center in Cherokee, Iowa. Services will be 10:30 a.m. Tuesday at Holy Cross Parish-Blessed Sacrament Church in Sioux City. Burial will be in Calvary Cemetery. Visitation will be 5:30 to 7 p.m. Monday, with a parish vigil at 7 p.m., at Christy-Smith Funeral Homes, Larkin Chapel. Jean was born July 22, 1933. She was the fourth of six children born to William and Mary (Daley) Strahmann. Jean grew up on a farm outside Larrabee, Iowa, and graduated from Larrabee High School. She went on to earn a R.N. Degree from St. Joseph Mercy School of Nursing in Sioux City. On Aug. 31, 1957, Jean was united in marriage with Richard "Dick" Brennan at Immaculate Conception in Cherokee, Iowa. She then devoted her life to being a wife and mother. She gave of herself to her family through daily delicious meals, encouraging words and unconditional love. She enjoyed baking, sewing and family gatherings that often included a game of cards. Jean worked as a nurse at St. Joseph Mercy Hospital in Sioux City. Her warm smile and gentle manner were a comfort to her patients. After her beloved Dick died April 29, 2011, she moved to Holstein to be near her daughter. The family would like to thank the Holstein Senior Living Center (formerly Char Mac) for their excellent care of mom. Jean was a member of Blessed Sacrament in Sioux City and later, Our Lady of Good Counsel in Holstein. Her trust in God and the love of her family helped her live a productive full life as a Type 1 diabetic for over 55 years. Jean is survived by her children, Mary (Matt) Forristal of Holstein, Margaret (Dave) Greving of Olathe, Kan., Theresa (Tony) Lauritsen of Kansas City, Mo., Michael (Caroline) Brennan of Omaha, and Julie (Sam) Kvidera of Traer, Iowa; 13 grandchildren; one great-grandchild; siblings, Gerald Strahmann of Cheyenne, Wyo., and Margaret (Milton) Nazaryk of Denver, Colo.; and five sisters-in-law. She was preceded in death by her parents; husband; a granddaughter, Megan Henn; and three brothers, Bill, Tom and Bernie Strahmann. The family has requested that memorials be directed to Bishop Heelan Catholic Schools or the American Diabetes Association.

The family of K. Jean Brennan created this Life Tributes page to make it easy to share your memories.

Send flowers to the Brennan family.