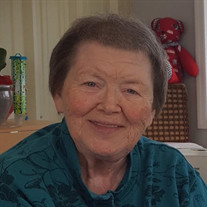 Julia A. Emge, 78, died Thursday, December 19, 2019, at Unity Point-St. Luke’s Medical Center in Sioux City, IA. A memorial service will be 12:00 pm Monday, January 6, 2020, at Christy-Smith Funeral Homes, Morningside. Visitation will begin at 10:30 am at the funeral home, leading up to the service. Julia Ann Petersen, the daughter of Marion Dorothy (Dobney) Petersen was born July 31, 1941, in Castana, IA. She was raised in South Sioux City, NE until they moved to Salix, IA in 1955. She graduated from Salix High School in 1959 and went on to earn a degree in Elementary Education from Central Missouri State College. Julie married Richard “Dick” Emge of Salix and lived in Sioux City for a short time before moving to Wisconsin. Dick passed away in June of 1972. Julia moved back to Salix in 1977 and continued to raise the children. She worked many jobs throughout her life and in 1982, began working for General Motors at AC Rochester in Sioux City, staying there for 11 years. In 1993, she worked for Gateway in North Sioux City, SD as a Client Service Rep, Executive Response, and Federal Contract Administrator. Julie had many close friends, and before leaving Gateway in 2006, started up the “Forget Me Nots” within the Red Hat Society. Julia was the Queen Mum and together the ladies enjoyed many adventures, celebrated life, and created new friendships wherever they went. Julia enjoyed reading and traveling. She cherished her time spent with family and loved spending time with her grandchildren and great-grandchildren. Julia was a storyteller and enjoyed sharing her life experiences with everyone she met. She accepted everybody for who they were, never judged, and made new friends wherever she went. Julia is survived by her three sons and their families, Jeffrey and Theresa Emge, Douglas and Stacey Emge, and Shawn and Laurie Emge; seven grandchildren; three great-grandchildren; a brother, Steve and Lisa Petersen; and many other close relatives and loved friends. She was preceded in death by her parents; her husband; and two brothers, Clarence “Red” and George Petersen.

The family of Julia Ann Emge created this Life Tributes page to make it easy to share your memories.

Send flowers to the Emge family.