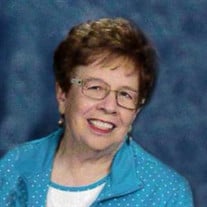 Judith Diane Herbold, (age 83), of Sioux City died March 8 in Phoenix, Arizona. Judy was born to Howard Pierce and Dorothy (Ellis) Hodoway on April 28, 1938, on a farm near Hawarden, Iowa. Judy learned at a very early age to rely on God for strength when at age 2 her father died. She graduated from Hawarden High School in 1956. She received a Bachelor of Fine Arts degree from Wayne State College, and additional credits from Wheaton College and Colorado State University. She received a Master’s Degree in English from the University of South Dakota. Judy married Donald Herbold, the love of her life, on December 21,1963 at the United Methodist Church in Hawarden. God blessed them with 58 years of marriage! She was a devoted wife, mother, grandmother and secondary teacher. God blessed Judy with twenty-five years of teaching English and Speech. Her career began at Washington High School in Cherokee, Iowa and later she taught speech and English at Lawton-Bronson High School and Western Iowa Tech Community College. In 1991, she received the Teacher Recognition Award from Northwestern College for outstanding contributions in the field of education. She enjoyed coaching numerous students for the Iowa State and All-State Speech Contests as well as high school plays. Portraying dramatizations of literary figures was also an activity she enjoyed. God gave Judy a heart for serving! She taught Sunday School, directed a youth choir, and was active in various committee. She was a member of St. Luke’s Hospital Auxiliary, P.E.O., and Alpha Delta Kappa Honorary Teacher’s Sorority. She was a member of Holy Cross Lutheran Church. In retirement she especially enjoyed accompanying sing-a-longs at area nursing homes. God blessed her with 8 grandchildren that she adored. She prayed for each of them and cherished every visit and phone call with them. Judy is survived by her husband, Don, and her three daughters and their spouses: Anne and Dan Strempke (Olathe, KS), Amy and Duane Jolivette (Newton, IA) and Cheryl and Dan Byers (Madison, AL); and eight grandchildren: Katelyn, Andrew (Katie), Sarah (Michael), Ryan (Johanna), Abby (Dan), Justin, Joshua and Jonathan. Judy was preceded in death by her parents and an infant brother, Howard Jr.

The family of Judith D. Herbold created this Life Tributes page to make it easy to share your memories.

Send flowers to the Herbold family.