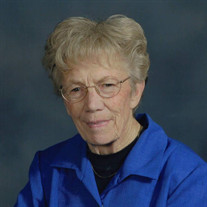 Joyce Williams, age 92, of Sioux City, passed away Monday, May 17, 2021 at her residence. Funeral service will be 10:00 a.m. Saturday, May 22, 2021 at Christy-Smith Funeral Homes, Larkin Chapel located at 2320 Outer Drive N. in Sioux City. Visitation will be 5:00-8:00 p.m. Friday, May 21, 2021 with a 7:00 p.m. prayer service at Christy-Smith Funeral Homes, Larkin Chapel. Burial will be following the funeral at Liberty-Perry Cemetery located west of Hinton. Joyce was born February 25, 1929 in Sioux City, IA, to Edward and Dorothy (McElrath) Andrews. She graduated from Lawton High School. She lived most of her life in Sioux City and the surrounding areas. Joyce married John F. Williams on June 11, 1949 in Sioux City. Joyce and John made their life, lived, farmed in the rural Sioux City area for many years. She was a member of the Wesley United Methodist Church in Sioux City. She enjoyed watching her children and grandchildren’s school and sporting events. She was their biggest fan. She also enjoyed taking care of the many farm animals, helping with chores, and listening to country music, along with attending music events at different venues in the area. Joyce was an avid bowler and "Master Strikeologist" that would put the best of them to shame. Those left to honor her memory are her daughter, Patti and Stephen Ferguson; their family, Laura and Brian Foral (Elle, Graham, Reese), Lindsay Ferguson; her daughter, Dorothy and Joe Tevis; their family, Lucas and Sarah Tevis (William, Samantha, Olivia), Marcus Tevis and Megan VanEyll (Ruby, Rickie), Mallory Jo Tevis and Martijnde Ruiter (Madeleine Jo); her son, Steven Williams; his family, Cody Matney, Josh Matney, Adam Matney; her son, Mark and Lori Williams; their family, Jamey Williams and Andrea Glasgow, Angela and Jonathan Naglieri, Lee Williams, Brooke and Keith Robinson (Krishna, Kendrick, Klein); and brother, Wesley Andrews. Joyce is preceded in death by her parents; her husband, John; and her sister, Francis Solomon.

The family of Joyce Elaine Williams created this Life Tributes page to make it easy to share your memories.

Joyce Williams, age 92, of Sioux City, passed away Monday, May...