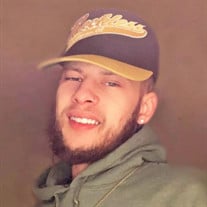 Joshua L. “Josh” Keithley, 26, died Friday, March 18, 2022, in West Des Moines, IA. A funeral service will be 1:00 p.m., Saturday, March 26, 2022, at Christy-Smith Funeral Homes, Larkin Chapel, 2320 Outer Dr. N, with visitation one hour prior. Online condolences may be expressed to the family at www.christysmith.com. Joshua Leighton “Josh” Keithley, the son of Steven and Lora (Hedges) Keithley was born December 24, 1995, in Sioux City, IA. He graduated from North High School in 2015. As a young teenager Josh loved to work outdoors and worked mowing lawns for years. He was very active in the Leeds Community. Josh worked for Asplundh Tree Service beginning his love for trees and climbing. In 2017 he moved his family to Des Moines, IA, where he was employed with Wright Outdoor Solutions, Pomp’s Tire Service and MANKO Window Systems. Josh’s world revolved around his two children, Bentlee and Bella. He loved just hanging out with them and his dogs Bear and Whiskey. Josh enjoyed making Tik Tok videos, always had his music blasting and singing offkey. From the age of 2, Josh had his own fashion sense, shoes, shirt and hat had to match. He enjoyed collecting hats and shoes. Josh had a heart that he didn’t hide, it was so big. He always had time to stop and listen if you needed him. He did late night calls and chats with anyone that needed him. Josh is survived by his mother, Lora (Tom Collins) Hedges of Woodbine, IA; his father, Steve (Lorie) Keithley of Omaha, NE; children, Bentlee and Bella; a brother, Shawn Keithley of Woodbine; grandmother, Donna Hedges of Sioux City; the mother of his children, Alyssa Mauro of Des Moines; best friend, Russell Davis; and many other relatives and friends. He was preceded in death by a sister, Amanda Benson; his grandfather, Leighton Hedges; uncles, Henry Hedges, Michael Keithley; an aunt, Peggy Sulentic; and best friends, Gavin Bush and Chris Baker.

The family of Joshua Leighton "Josh" Keithley created this Life Tributes page to make it easy to share your memories.

Send flowers to the Keithley family.