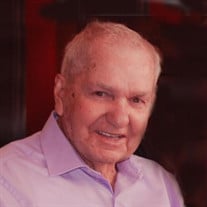 Joseph A. “Joe” Schellinger, 87, of Sergeant Buff, died March 22, 2022, at his home after his battle with bladder cancer. A funeral service will be 2:00 pm Tuesday, April 5, 2022, at Christy-Smith Funeral Homes, Morningside Chapel, 1801 Morningside Ave., with visitation one hour prior. Burial will be in Memorial Park Cemetery. Online condolences may be expressed to the family at www.christysmith.com. Joe was born to Mae (Smith) and William Schellinger on April 14, 1934, in Sioux City, Iowa. He married Lois Wiig on January 3, 1953. Joe was in the Naval Reserves for 8 years. He was a member of the Morningside Lodge 615 A.F. & A.M. and a member of the Morningside Chapter #502 Order of the Eastern Star for many years. He was in the trucking business, Schellinger and Sons Trucking, with his father and his brother Roland for 18 years. In 1967, he worked for the City of Sioux City at the airbase doing maintenance on airplanes. In 1972, they moved to Bronson, Iowa, and Joe worked at Kent Feeds for 21 years before retiring early in 1990. Mr. and Mrs. Schellinger moved back to Sergeant Bluff in 1994. Joe’s hobbies included fishing and feeding the birds and squirrels. The couple made a yearly trip to Canada to go fishing, along with his brother Roland and his wife, Deon, along with their children and grandchildren for many years. He is survived by his wife, Lois Schellinger, of 69 years; two sons, Douglas (Connie) Schellinger of Denver, CO, and Dennis (Holly) Schellinger of Aurora, CO, and Dennis’ children Tara (Brent) Longfellow, Amber (Aaron) Mitchell, Deserae (Ed) Wood; two daughters, Jodie Plendl, Denver, CO, and her children Jennifer (Tom) Boston, Michelle (Shaun) Stinnett, Katie (Erik) Sackett; and Karen (Ron) O’Donnell, Sergeant Bluff, IA, and their children Alicia (EJ) O’Donnell-Lines, Kelsey (YenHung Lai) O’Donnell, Megan (Graham Brunning) O’Donnell; 12 great-grandchildren; 1 great-great-grandchild; a sister-in-law, Deon Schellinger of Bronson, IA; and many cousins, nieces, and nephews and their families. He was preceded in death by his parents, and a brother, Roland Schellinger.

The family of Joseph A. "Joe" Schellinger created this Life Tributes page to make it easy to share your memories.

Send flowers to the Schellinger family.