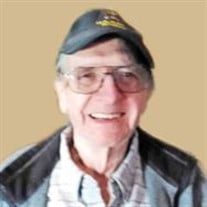 John Coon, 77, died Monday, September 16, 2019, at Westwood Specialty Care in Sioux City, IA.    A visitation will be 3:00 pm to 5:00 pm Sunday, September 22, 2019, at Christy-Smith Funeral Homes, Morningside, with a prayer service at 4:00 pm.  A funeral service will be 2:00 pm Monday, September 23, 2019, at Christy-Smith, Morningside. Burial will follow in Calvary Cemetery with military honors provided by the U.S. Navy. John Coon, the son of Ray and Viola (Fedderson) Coon was born July 26, 1942, in Moville, IA.  He graduated from Climbing Hill High School in 1959.  John then enlisted in the U.S. Navy, and served honorably in Japan until his discharge in 1963. On November 14, 1964, John was united in marriage with Mary “Phyllis” Aquirre at Immaculate Conception Catholic Church.  He worked in maintenance at Prince Hydraulics, Schaeff Namco, and at Diosynth.  John retired from the City of Sioux City in 2002.  Phyllis died April 21, 2019. John was a member of the Strollers Corvettes and very much enjoyed nostalgic stock car racing. John is survived by three children, John A. (Shelly Jacobs) Coon of Sioux City, Dennis P. Coon of Portland, OR, Melissa R. (Rick) Gabriel of South Sioux City, NE; 12 grandchildren; nine great-grandchildren; siblings, Jim (Marge) Coon of Holly Springs, IA, Sharon (Jim) Mitchell of Sioux Falls, SD, Sandra Merritt of Sioux City; and many other relatives and friends.   He was preceded in death by his parents; wife; and a grandson.

The family of John Coon created this Life Tributes page to make it easy to share your memories.

Send flowers to the Coon family.