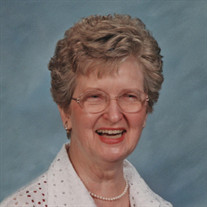 Joanne Marie Wiggs, 86, of Sioux City, passed away peacefully at Sioux City's Sunrise Retirement Community Monday, Sept. 24, 2018. After a lengthy battle with Alzheimer's, Joanne is leaving this earth to rejoin the love of her life, Jim Wiggs, whom God called this past December. Services will be 10:30 a.m. Thursday at Holy Cross Parish-Blessed Sacrament Worship Center. Burial will be in Calvary Cemetery. Visitation will be 5 to 7 p.m. today, with a prayer service at 7 p.m., at Larkin Chapel, Christy-Smith Funeral Homes. (Due to street construction, the Larkin parking lot will be accessible from Division St.) Joanne was born on Jan. 3, 1932, in Sioux City, to Roy and Helen Martin. Joanne graduated from Central High School in 1950. Joanne married Jim Wiggs on May 7, 1955. Jim and Joanne were inseparable for the next 62 years. Joanne spent the first 21 years of marriage as a mother and housewife. In 1976, she took a job with Central United Life Insurance Company, where she remained for 16 years, before going to work for the Catholic Diocese of Sioux City. Included in her list of friends at the Catholic diocese were Monsignor Richard Zenk and Cardinal Daniel Dinardo. Joanne will be remembered as a devoted wife, a loving mother, a devout Christian, and a wonderful friend to many. Her passion for life, and the incredible love for her husband and family, will be remembered for generations. While Joanne will be greatly missed by her family and friends, it is comforting to know that Jim has been patiently waiting for her. She will be a welcome addition into God's heaven. Those left to cherish her memory include her four children, Roy Wiggs of Tama, Iowa, Mark (Michele) Wiggs of Sioux Falls, S.D., Diane (Robert) Emerick of Sioux Falls, and Karen (Roger) Timm of Carroll, Iowa; nine grandchildren, Jack, Sarah, Elizabeth, Matt, Cody, Cory, Maddie, Miranda, and Joe; as well as seven great-grandchildren. She was preceded in death by her husband, Jim; her parents, Roy and Helen Martin; and her sister, Jeanne Asch.

Joanne Marie Wiggs, 86, of Sioux City, passed away peacefully at Sioux City's Sunrise Retirement Community Monday, Sept. 24, 2018. After a lengthy battle with Alzheimer's, Joanne is leaving this earth to rejoin the love of her life, Jim... View Obituary & Service Information

The family of Joanne M. Wiggs created this Life Tributes page to make it easy to share your memories.

Send flowers to the Wiggs family.