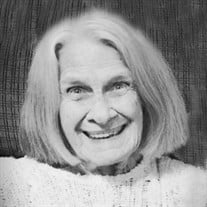 Joanne Elaine Reed, age 81, passed away peacefully at home following a lengthy illness on Saturday, September 12, 2020. A memorial service will be 10:30 a.m. Thursday, September 17, 2020 at Christy-Smith Funeral Homes, Morningside Chapel, located at 1801 Morningside Ave. Visitation will be held one hour prior to the service. Online condolences may be left at www.christysmith.com. Joanne Elaine Nelson, the daughter of Nick and Margaret (Fowler) Nelson, was born September 2, 1939 in Moorhead Minnesota. She attended school in Sioux City where she resided for most of her life. On September 21, 1957 Joanne was united in marriage with Elmer Reed at First Lutheran Church in Sioux City. She attended Edwards Business School and later attended Morningside College. She worked in various financial institutions as an office manager. She continued her career as a co-owner of a gift store for several years up until her retirement. Joanne enjoyed bowling, crafts, and the ocean. Joanne was a prolific reader and had a passion for caring for others. Left to cherish her memory are her husband, Elmer; children, Denise (Greg) Alva, Randy Reed, Dawn (Robert) Zeising, Patrick (Ann) Reed; grandchildren, Desiree, Danielle, Andrew, Alicia, Harmanie, Kepler, Nicholas; great-grandchild, Denney; brother, Raymond (Teresa) Nelson. She is preceded in death by her parents; brothers, Edward, Duane and Robert; sister, Dorothy.

The family of Joanne Elaine Reed created this Life Tributes page to make it easy to share your memories.

Send flowers to the Reed family.