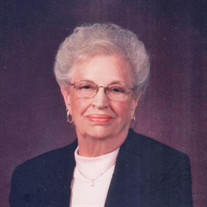 Joanne G. “Jo” Smith, 92, died Tuesday, December 29, 2020, at MercyOne Medical Center in Sioux City, IA. A Mass of Christian Burial will be 10:30 am Tuesday, January 5, 2021, at Mater Dei Parish-Immaculate Conception Catholic Church with visitation one hour prior. Interment will be in Calvary Cemetery. Christy-Smith Funeral Homes, Morningside Chapel, is assisting the family with arrangements. Jo was born August 20, 1928, in Parkston, SD to Joseph F. and Marie G. (Mohr) Jungwirth. In September of 1928, the family moved to Sioux City, IA and she lived there all her life. Jo attended Longfellow grade school and East High School, graduating with honors in 1947. She went on to attend Edwards Business School. Jo went to work in September of 1947 for Securities Acceptance Corporation (later known as The Associates). She worked there 36 years, retiring in 1983. After retiring, Jo volunteered at Mercy Medical Center and The Queen of Peace in Trinity Heights. Jo married Robert J. Smith on July 12, 1952, on her parent’s 25th wedding anniversary. After their retirement, they spent time traveling and spending time at their cabin at Spirit Lake. Jo was a lifetime member of Immaculate Conception Catholic Church and several card clubs. She was also a member of Credit Women, Int. since 1967, serving as President in 1971. Jo loved her animals, especially her dogs, Koko and Sammy, and enjoyed reading, knitting, playing cards, eating out, and visiting her many friends. She also enjoyed her daily Mass and then having coffee at McDonalds with the I.C. Koffee Klub Group. Jo dearly loved her nieces and nephew and their families, her sister-in-law, Donna, and all her friends in the Merry Widows Club and Credit Women, Int. Jo is survived my many special friends and neighbors. She is preceded in death by her husband, Robert on January 13, 1997; her parents; a brother, Gene Jungwirth; and special friends, Frank Schaffer and Pat and Marv Schafer. In lieu of flowers, donations can be made to Immaculate Conception Church, Carmelites, or the Siouxland Humane Society. A final Thank You to Donna and Jeanette for all their help!

The family of Joanne "Jo" G. Smith created this Life Tributes page to make it easy to share your memories.

Send flowers to the Smith family.