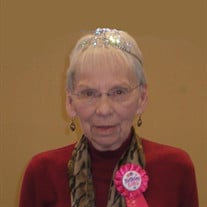 JoAnn DeMers of Sioux City, IA passed away peacefully Thursday, December 24, 2020 in Sioux City, IA. Memorial services will be 10:30 a.m. Saturday, January 2 at Nativity Church in Sioux City with Father Armond Bertrand officiating. Visitation will be Friday, January 1 from 4 p.m. to 7 p.m. at Morningside Chapel, Christy-Smith Funeral Home in Sioux City. On-line condolences may be left at www.christysmith.com JoAnn was born January 2, 1932, to William and Tess Riley. She was born and raised in Sioux City and graduated from East High School in 1950. She went to Radiology School at Sacred Heart Hospital graduating in 1952 and afterward she taught radiology from 1952 to 1960. JoAnn worked at St. Luke’s Hospital up to the time of her retirement. JoAnn has also worked at Zale’s and enjoyed her time selling Rubbermaid as a Regional Manager. JoAnn had many passions throughout her life, she loved to read, a couple of her favorite authors were Patricia Cornwell and most recently David Baldacci. She especially loved playing the piano and teaching her children and grandchildren how to play. Along with reading and playing the piano, JoAnn loved to knit, travel, and support her children in all their hobbies and activities. JoAnn was actively involved in church and enjoyed singing in the choir. Survivors include daughter, Mikki DeMers of Conroe, Texas; son, Raymond W. and Audrey DeMers of Sioux City; daughter, Teri McCarthy of San Antonio, Texas; daughter, Lois DeMers of Conroe, Texas; daughter, Vikki and Al Clayton of Farmington, Minnesota; and a son-in-law, Steve Lamoureux and Julie Lamoureux of Wayne, Nebraska; and numerous grandchildren and great grandchildren. JoAnn is preceded in death by her parents, William and Theresa Riley, brother, William Riley, husband, Raymond DeMers, daughter, Pamela Lamoureux, son, Ronald DeMers and son, Rick DeMers.

The family of JoAnn DeMers created this Life Tributes page to make it easy to share your memories.

Send flowers to the DeMers family.