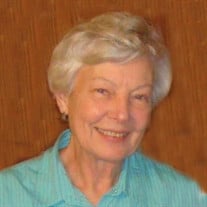 Joan Marie Kellen, age 86, of Sioux City died on Saturday, September 26, 2020 at a local care facility. Mass of Christian Burial will be held at 10:30am Friday, October 2, 2020 at Mater Dei Parrish Nativity Church in Sioux City with Father Gerald Feierfeil officiating. Burial will follow in Graceland Park Cemetery. Visitation will be held on Thursday from 5-8pm with the family present from 6-8pm, Rosary 7pm at Christy Smith Morningside Chapel, 1801 Morningside Avenue. Family has asked that everyone must wear a mask for all services. Joan was born on August 5,1934 in Wynot, Nebraska, the daughter of Anthony and Laura (Kathol) Wieseler. She attended and graduated from Wynot Public Schools. Following her high school graduation she attended Mount Marty College in Yankton, South Dakota where she studied nursing. She was united in marriage with Carl Kellen on June 15, 1955 at St. Peter’s Catholic Church in Newcastle, Nebraska. The couple made Sioux City their home following their marriage. Joan worked at the Normandy Restaurant for a few years before going to US Bank where she worked as a teller supervisor for 27 years before retiring in 2000. She was a member of Nativity Catholic Church and enjoyed being a mall walker for many years. Joan is survived by her son Keith and his wife Laura of Sioux City, son David and his wife Linda of Sioux City, daughter Lori Wendt and her husband Steve of Sioux Falls, South Dakota, son Dan and his wife Roxanne of Sioux City, and son Jim and his wife Diane of North Liberty, Iowa. She is also survived by her 19 grandchildren, 26 great-grandchildren, her brother Mel Wieseler and his wife Kathy, brother Roger Wieseler and his wife Pam, sister Ruth Larson and her husband Gene, sister Ramona Hilsinger and her partner Kenny Beaudette. She is also survived by numerous nieces and nephews. She was preceded in death by her parents, her husband Carl, several brothers and sisters, her son Michael and grandson Brett.

The family of Joan Marie Kellen created this Life Tributes page to make it easy to share your memories.

Send flowers to the Kellen family.