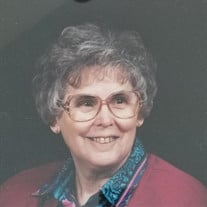 Jo Ann Berggren, 90, of Sioux City, died Friday, March 1, 2019, at Sunrise Retirement Community in Sioux City. Services will be 10:30 a.m. Thursday at St. Luke Evangelical Lutheran Church, 2039 S. St. Aubin, in Sioux City, with the Rev. Jay Denne officiating. Interment will be in Graceland Park Cemetery, Sioux City, IA. Visitation will be 4 to 8 p.m. today, the family will be present 6 to 8 p.m., at Morningside Chapel, Christy-Smith Funeral Homes, 1801 Morningside Ave., in Sioux City. Online condolences may be made to the family at www.christysmith.com. Jo Ann was born on April 13, 1928, in Lincoln, Neb., to Curtis N. and the Rose (Darrah) Parsons. Her father was an engineer for the state of Nebraska so the family moved frequently. She graduated from Wahoo High School in 1946 and attended University of Nebraska Lincoln for two years. Jo Ann moved to Sioux City in 1948. She married Derald Berggren on May 15, 1949 in Wahoo. Jo Ann worked for the Zenith Corporation for 13 years until the plant closed. She attended Western Iowa Tech Community College and became a drafter, working for McKraken Concrete Pipe and Manufacturing Company until her retirement. Her hobbies included painting, gardening, ceramics and watching her beloved Nebraska Cornhuskers football team. She loved to water ski and did so until her late sixties. Jo Ann was a member of St. Luke Evangelical Lutheran Church, altar guild, and woman's circle. She was also a member of the Morningside Chapter of the Eastern Star since she was 18. Surviving are daughters, Susan (Merlyn) Steecker of Sioux City, and Deborah (Gordon) Freed of Des Moines; three grandchildren, Jim Jager, Tiffany Steecker and Michelle Steecker; three great-grandchildren; and sister, Patricia Sass of Lincoln. She was preceded in death by her husband, Derald; and brothers, Jack Parsons and Bill Parsons.

The family of Jo Ann Berggren created this Life Tributes page to make it easy to share your memories.

Send flowers to the Berggren family.