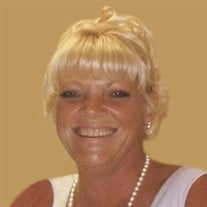 Jill Anne Burnight, 59, of North Sioux City, died Friday, May 24, 2019, at her residence. Services will be 11 a.m. Thursday at Sacred Heart Catholic Church in Sioux City. Burial will be in Calvary Cemetery and luncheon to follow. Visitation will be 5 to 7 p.m. Wednesday, with a vigil service at 7 p.m., at the church. Arrangements are under the direction of Morningside Chapel, Christy-Smith Funeral Homes. Jill was born in Bellflower, Calif., on Oct. 4, 1959, the daughter of Al Ray Albright and Kathleen (O'Hern) Albright. Around 1968, the family moved to Sioux City. Jill attended school at West High School. On Oct. 1, 1976, she was united in marriage to Bradley E. Burnight. To this union two children were born, Deanna Rae and Chad Edward. She was heartbroken when she lost her husband, Brad, of almost 32 years in May 2008 and special friend, Tim Hulleman, in March 2017. Jill formerly worked with the family at Eric's Casino and The Glass Palace in North Sioux City. She enjoyed being a homemaker and mother to her children and spending time with her two grandsons, MaeMae and Boo. She also enjoyed gardening and taking care of her flowers. She cheered loudly for the Green Bay Packers and Iowa Hawkeyes and would do anything to be outside basking in the sun, laying in a pool, drinking a cold one and listening to Rock and Roll. She is survived by her daughter, Deanna (Rick) Scott of Sioux City; her son, Chad Burnight of North Sioux City; two grandsons, Mason and Nate; her father, Al Ray Albright; a sister, Judy Robak; her sister-in-law, Deanna Grangaard; brothers-in-law, Terry Burnight and Dennis Burnight; along with many nieces, nephews, family, and friends. Jill was preceded in death by her husband, Brad; mother, Kay; brothers, David and Ricky (infant brother); father-in-law, Patrick Burnight; and special friend, Tim.

Jill Anne Burnight, 59, of North Sioux City, died Friday, May 24, 2019, at her residence. Services will be 11 a.m. Thursday at Sacred Heart Catholic Church in Sioux City. Burial will be in Calvary Cemetery and luncheon to follow.... View Obituary & Service Information

The family of Jill Anne Burnight created this Life Tributes page to make it easy to share your memories.

Send flowers to the Burnight family.