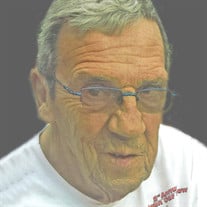 Jerome “Jerry” Snodgrass, 82, of Sioux City, IA, died Wednesday, July 25th at his home after a short battle with lung cancer. Services will be Monday, July 30th at 12:00 p.m. with visitation at 11:00 a.m. at Christy Smith Funeral Home- Morningside Chapel, with Pastor Del Olivier officiating. Burial will be at Fairview Cemetery in Albaton, IA (Sloan). Online condolences may be sent to www.christysmith.com. Jerry Snodgrass was born May 15, 1936 to Earl and Catherine (Roberts) Snodgrass in Sloan, IA. He attended Sloan High School, but later received his GED. Jerry married Toni Olson on November 4, 1961 in Moville, IA. Most of his working career was spent being an over-the-road truck driver, while Toni raised their six kids. He traveled many miles and made it to 48 of the 50 states. Jerry was a “Jack of All Trades,” a very handy man and could fix anything around the house to cars in the garage. His garage was his favorite place to be, tinkering and fixing things for others. He loved spending the winters in Texas with his son, Dan. He enjoyed NASCAR and the warm weather. He liked driving his truck, old cars, and going to the dog tracks back in the day. Jerry spent many years caring for Toni after she was diagnosed with Alzheimer’s disease at age 57. He loved and cared for her every day at home for nine years, until she entered the nursing home where he visited her almost daily for four years. She was the love of his life and he was lost without her. Now, they are pain free and together again. He loved his children, grandchildren, and great-grandchildren. It brought a smile to his face to attend their events like soccer, baseball, dance, volleyball, and blowing bubbles on the patio. Little kids brought out the kid in him. He smiled most when holding babies and seeing the little kids. Jerry had a routine the past couple years. He enjoyed mornings at McDonald’s, having coffee and breakfast with the “regulars.” In the afternoons, he would go to lunch at Taco John’s. He established friendships with the people who worked there. When Jerry walked in the door, everyone acknowledged him by saying “Hi Jerry” or “Jerry’s here!” We are grateful for their kind and caring friendships. Jerry is survived by his six children. Scott of Sioux City; Dan of Gainesville, TX; Melissa (Greg) Larson of Missouri Valley, IA; Amy Swenson of Sioux City; Doug of Sioux Rapids, IA; and Bob of Sioux City; His grandchildren, Jeremy Maxfield, Ashley Johnson, Jillian Snodgrass, Michayla Snodgrass, Madalyn Larson, Elliott Swenson, Lauren Larson, Samantha (Tim) Rakotz, Jeff (Tiffany) Titus, Salena Titus, and 10 great-grand kids with another one on the way; 3 brothers, Johnny Roberts of Vero Beach, FL; Jim (Bernice) Snodgrass of Aloha, OR; Chuck (Rita) Snodgrass of N. Sioux City, SD; a sister-in-law Julie Casavant of Sioux City and many nieces nephews, and other relatives and friends. He was preceded in death by his wife, parents, and two brothers Paul and his wife Barb Snodgrass, and Bill Snodgrass. Memorials may be directed to Hospice of Siouxland and to the family. The family would like to thank Hospice nurse, Jena, and social worker, Melissa, for all of their loving care and support through this journey.

The family of Jerome L. "Jerry" Snodgrass created this Life Tributes page to make it easy to share your memories.

Send flowers to the Snodgrass family.