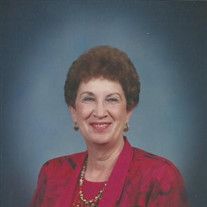 Jeannette Elaine Beekman, 83, went to be with her Lord and Savior, on Wednesday, February 5, 2020. After a life filled with love, she died peacefully with her husband Dennis, by her side. A celebration of life will be held at 11:00 a.m., Saturday, February 8, 2020 at Grace United Methodist Church, Sioux City, Iowa with Pastor Jim Shirbroun officiating. Interment will be 9:30 a.m., Monday, February 10 at Memorial Park Cemetery. Family will receive friends from 4:00-7:00 p.m., Friday, February 7, 2020 at Christy-Smith Funeral Home, at Morningside Chapel located at 1801 Morningside Avenue, Sioux City, Iowa, 51106. Jeannette was born on April 28, 1936 in Blockton, Iowa, the daughter of Arthur P. and Clara Lavelle King. She graduated from high school in 1954. She married Jack Huff and had three children, Walter, Debbie and Diane Huff, while living in Ida Grove from 1962 to 1979. She then moved to Storm Lake, Iowa in 1979 where she owned and operated the Sail Inn Motel. In August 1985, she married Dennis Beekman and gained two additional step-children, Maria and Jennifer. Jeannette started her next business, Antiques and Treasures in 1988 in the home attached to the Sail Inn Motel Office. Jeannette made her final move to Dakota City, Nebraska in 1997 where she and her husband lived together until her death. Jeannette was a devoted wife, mother, grandmother and great-grandmother, sister and friend. There were no strangers to Jeannette as she was very out-going and always had a smile and positive attitude about everything in life. Beyond being a female entrepreneur, she loved to golf, travel, play cards (Bridge was her favorite), garden with Denny, participate in church activities and spend time with family. Jeannette leaves her family, who will cherish her loving memory, her husband Dennis, children, Walter (Lora Lee) Huff of Lee’s Summit, Missouri, Debbie Huff of Landenberg, PA, Diane Mangold of Alta, IA; Son-in-law, Greg Mangold of Ely, MN; Maria (Don) Harder of Lincoln, NE, Jennifer (Chris) Gump of Mendon, MI; grandchildren, Ashley (Jake) Oser, Melissa (Ryan) Ryser, Kelsey Mangold, Alexandrea Harder, Preston Gump, Ainsley Gump, and great-grandchildren, Addison Oser, Mason Oser, Greyson Oser, Judah Ryser, Shiloh Ryser, brother, Jerry (Judy) King, sister-in-law, Lynn King, and many nieces and nephews. She was preceded in death by her parents, Arthur P. and Clara Lavelle King; brother, Charles A. King.

Jeannette Elaine Beekman, 83, went to be with her Lord and Savior, on Wednesday, February 5, 2020. After a life filled with love, she died peacefully with her husband Dennis, by her side. A celebration of life will be held at 11:00 a.m., Saturday,... View Obituary & Service Information

The family of Jeannette Elaine Beekman created this Life Tributes page to make it easy to share your memories.

Jeannette Elaine Beekman, 83, went to be with her Lord and Savior,...

Send flowers to the Beekman family.