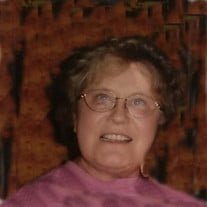 Jean A. Olson, 81, died Tuesday, June 25, 2019, at Countryside Health Care Center in Sioux City, IA. A funeral service will be 10:30 am Monday, July 1, 2019, at Christy-Smith Funeral Homes, Morningside, with visitation one hour prior. Burial will be in Memorial Park Cemetery. Jean Arlene Sweeney, the daughter of Clifford and Pearl (Rolog) Sweeney was born March 8, 1938, in Sioux City, IA. She graduated from East High School. On April 7, 1962, Jean was united in marriage with David Olson in Sioux City. She was employed at the Half Price Store as an associate and later in the accounting department. Jean then worked at Gordman’s, retiring in 2013. David died June 23, 2015. Jean enjoyed reading, making ceramics, and playing Poker and Bingo with her girlfriends. However her greatest love was spending time with her grandchildren. Jean is survived by her children, Scott Olson of Sioux City, Mitzi (John) Dillingham of Lakeville, MN, Steve (Dana) Olson of Omaha, NE; seven grandchildren; six great-grandchildren; and many other relatives and friends. She was preceded in death by her parents; husband; siblings, Dorothy Helm, Richard Sweeney, Anne Sweeney, Jim Sweeney; and a granddaughter, Emily Dillingham.

The family of Jean Arlene Olson created this Life Tributes page to make it easy to share your memories.

Send flowers to the Olson family.